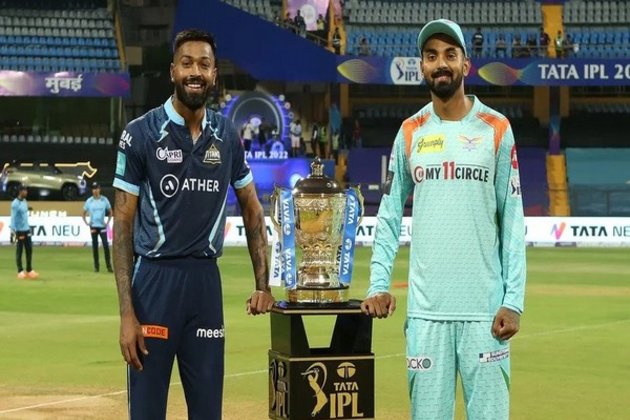 Pune (Maharashtra) [India], May 10 (ANI): Gujarat Titans skipper Hardik Pandya won the toss and opted to bat first against Lucknow Super Giants in the match number 57 of the IPL 2022 here in Pune on Tuesday.

The Titans and the Giants will face each other again in the return-leg fixture for the newbies but this time the Maharashtra Cricket Association Stadium will be playing the perfect host to the battle of two runaway leaders.

The Giants sit at the top of the points table courtesy of a superior Net Run Rate (NRR) imparting the added sway over the Titans. The latter is in the second position of the pecking order with identical numbers in terms of points.

At the time of toss, Hardik Pandya said: “We will bat first. Want to put up some runs, the wicket looks alright for the entire duration of the game. The wicket has played some role, batting first here – teams have won plenty of games.””We want to get a score on the board. We have won some 5 games we were looking like losing, we need to forget the last couple of losses, learn from those things, the tournament isn’t over as yet. Three changes for us – Matthew Wade is in for Lockie Ferguson, Sai Kishore replaces Sai Sudharsan and Yash Dayal is in for Pradeep Sangwan,” he added.

While Lucknow captain KL Rahul said: “We would have wanted to bowl first. Not sure about how this wicket will play, so want to give our bowlers the best shot at using it first. I do think chasing is the perfect game for us, but we have won well after batting first as well.””We are playing a top team, a competitive unit, so we’ll have to hold our pressure, assess the conditions quickly and get our tactics and strategies right. One change for is – Ravi Bishnoi misses out, Karan Sharma replaces him,” he pointed.