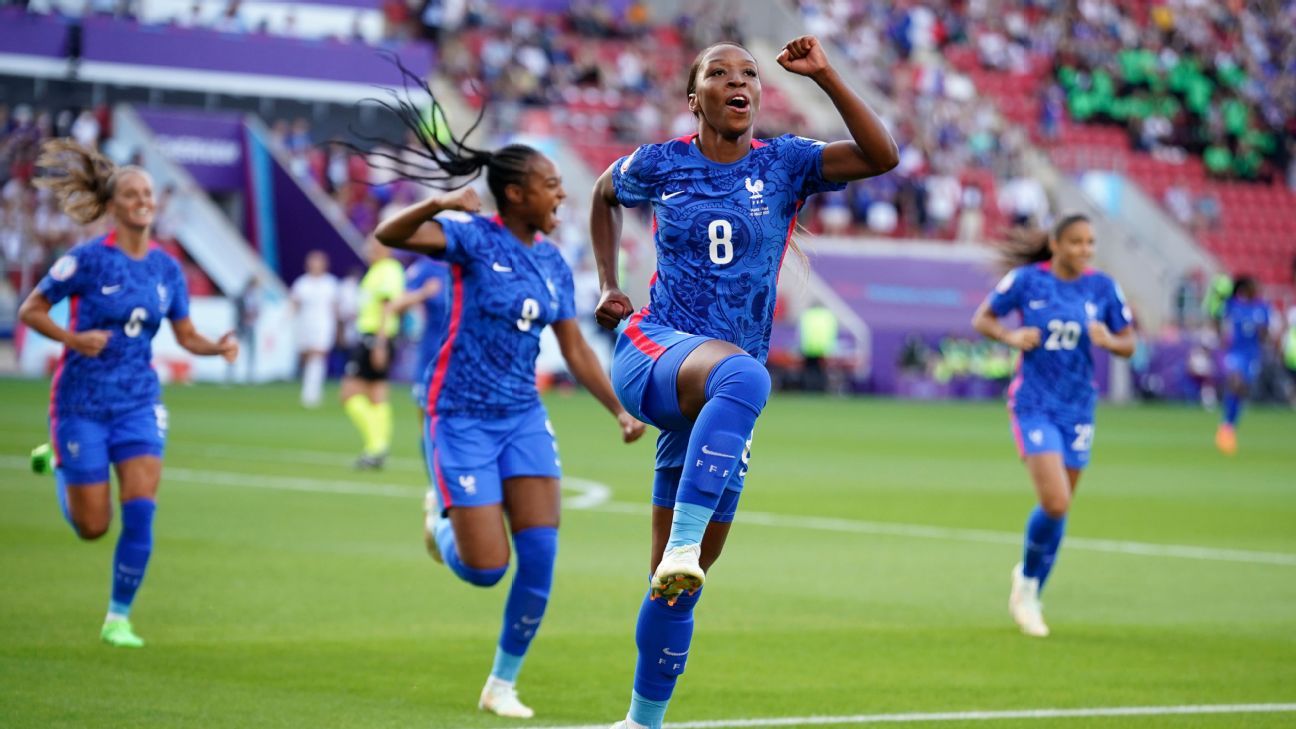 There was a buzz around Rotherham as fans awaited the last game of the first Euro 2022 matchday to kick off, the highly competitive Group D had already seen a draw between Iceland and Belgium in the first kickoff and the second looked too close to call. With the stands at the New York Stadium having taken on a blue complexion for the clash between France and Italy, it seemed no one could wait to get started, not even the players who got the ball rolling as the stadium announcer was still counting down from 10.

It was to be a good indication for the speed the teams wanted to play at, after Barbara Bonansea fluffed a good chance, there was to be no let-up for Italy, as Les Bleues hammered goal after goal into Laura Giuliani‘s net en route to a 5-1 win.

– Every Euros game LIVE on ESPN: Navigate the schedule
– Don’t have ESPN? Get instant access

There are architypes and stereotypes in football, from Brazil’s samba to Dutch total football. For all the Italians have given the world, from the early dominance of their men’s national teams, catenaccio is always where our minds go when we think of the Azzurri, yet this is a style that Milena Bertolini, the coach of the women’s national team, has never preached. If catenaccio literally translates as “door-bolt,” it was hard to know what to call the style on show from team in white in Rotherham — maybe spalancato (wide open). Dressed from head to toe in white rather than their traditional and iconic blue — with the French similarly as decked out in monochromatic blue — it was almost as if their kit was an ode to their defensive surrender.

France came into the tournament with numerous question marks hanging over the heads of those in the team: Would they finally be able to clear the mental hurdles that mined the home straight of every tournament they had featured in? Their star player, Amandine Henry had been left at home, the Lyon midfielder so often the conductor on the pitch had fallen foul of her coach, Corinne Diacre, and it became clear long before the team convened for the tournament she would be playing no part.

Just like their male counterparts, there always seemed to be some noise and drama around the French team. In the past three years, so much had been coming from the dugout but, when the ball began to roll in Rotherham, Les Bleues were all singing from the same sheet as their coach orchestrated one of the most comprehensive wins in Euros history. If there was any unrest, it had been put out off the mind as soon as the whistle went.

In the ninth minute, a fortuitous bounce in the box saw the ball land at the feet of Geyoro for the midfielder to fire in minutes before Giuliani could only parry a weak cross directly to Marie-Antoinette Katoto. The delivery was the type the Paris Saint-Germain front woman was used to receiving from teammate Kadidiatou Diani, not the opposition, but one of the most potent strikers in Europe didn’t need any more encouragement to make it two.

That was where the match got away from Italy, the defence left exposed as France settled into a delirious passing game showing the quality that so often had them labelled as favourites. Although the Lyon contingent in the squad was to be mostly found in the defence, the way the attack and midfield moved with crushing accuracy, like a shark feeding off of the chum in the water, would have left Lyon coach Sonia Bompastor purring.

Two became three when Delphine Cascarino lashed in a sublime low effort before Geyoro wrote her first piece of history for the night, notching France’s fourth goal of the first half, the most they’d ever scored in a Euros match before. Five minutes later the midfielder went one better when she completed her hat trick with a delicious volley, making her the first player in Euros history to score a first-half hat trick, and just the second Frenchwoman to score three times in one Euros match. It was, incidentally, the one time five goals had been scored in a first half of a Euros match.

Disconsolate, Italy jogged off at the break, knowing they were on the wrong side of history, the players simply unable to cope with the torrent of French pressure. For Diacre and France, there was little more that could have been asked, it was as if the team had been playing FIFA on easy mode, world class an understatement. The bolt had been yanked open, the door kicked down and the castle pillaged.

Although they didn’t let up during the first half, the second was far flatter from a French perspective, the job done, the players relaxed just enough for an Italy team determined not to concede another and tie their biggest ever losses (6-0 versus Denmark and Switzerland). An endless string of substitutions fragmented the half that saw Geyoro involved in even more history after she had been caught late and high by Sara Gama, the Italy captain the first player in Euros history to have a straight red card overturned by a VAR review. The hat trick hero one of the many who was soon replaced on the pitch as the two teams continued to look less and less like those who’d lined up earlier in the evening.

Make picks throughout the Women’s European Championship for a shot at $5,000.
Make Your Picks

A conciliation goal for Martina Piemonte was arguably no less than Le Azzurre deserved, while giving Italy a rare moment to celebrate served to highlight how the French had taken their foot off of the gas.

The questions around this French team had been about whether they could get over the internal problems as well as their own perpetual quarterfinal knockout. Les Bleues have been unable to progress beyond the last eight in any of their past three Euro outings or, indeed, of their past four major tournaments — two World Cups and two Euros. Too often France had looked world class in the group phase of tournaments, able to out-class any opposition but had come undone in the knockouts, and their roaring win in Rotherham could do little to answer the question of what comes next for this team.

On the night, the history of the national team, of the greats who’d donned the famous blue shirts and their enduring tournament disappointments counted for very little, all the drama and noise bubbling away as this generation of greats put on an opulent attacking show that won’t be forgotten by anyone for a long time to come. They will go into their next game, against the lowest-ranked nation in their group, Belgium, next and will be looking for more of the same devastating attack to keep the momentum going and drive them on in this tournament, so if they do reach the quarters, they can finally go one (if not two) better.

For Italy, there is little time to lick their wounds before they face Iceland, the first job for Bertolini, not so much looking for the bolt for the door but rather, locating the door that France blasted off its hinges.