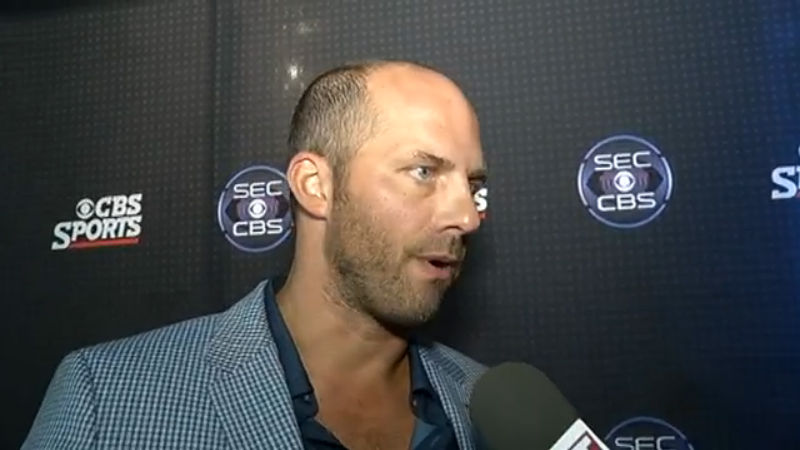 Nashville, Tenn. (WIAT) — On Saturday, former Alabama quarterback and radio host Jay Barker was arrested in Nashville and charged with assault after allegedly trying to hit his wife, country music singer Sara Evans, with his vehicle.

Barker, 49, was arrested and taken to the Davidson County Jail, where he was charged with aggravated assault with a deadly weapon. On the arrest report, his name was listed as Harry Jerome Barker. He was placed on a 12-hour hold for domestic violence and his bond was set at $10,000. At 7:29 p.m. Saturday evening, he was released on bond.

According to an affidavit of Barker’s arrest, police arrived at a home on Norwood Drive in Nashville at 1:30 a.m. Saturday, where Evans claimed she was leaving a party at her neighbor’s house where she got in the passenger seat of a friend’s car to ride across the street. As they were passing the driveway, Evans alleged to have seen Barker “backing up his vehicle at a high rate of speed attempting to hit them but missed.”

The affidavit stated Barker allegedly drove away before Evans got in touch with police. He later returned and spoke with officers. Evans and the other witness claimed Barker was trying to intentionally hit them. He was subsequently arrested.

Barker and Evans married in 2008, but are now separated, according to the affidavit.

Barker, a Trussville native, played under Gene Stallings at the University of Alabama. In 1992, he led the Crimson Tide to a national championship after defeating the Miami Hurricanes in the 1993 Sugar Bowl. Barker won the Johnny Unitas Golden Arm Award in 1994 and finished fifth for the Heisman Trophy.

In 1995, Barker was selected in the fifth round of the NFL Draft by the Green Bay Packers, but did not make the team. He joined the New England Patriots in 1995, and the Carolina Panthers in 1996, but never played in a regular season game. From 1998 to 2001, he played in the Canadian Football League for the Toronto Argonauts. In 2001, Barker came back home to play for the Birmingham Thunderbolts in the XFL.

Barker is co-host of the radio show, “The Jay Barker Show,” which has aired on 100.9 FM since 2018. Previously, he co-hosted a show on Birmingham’s WJOX with former Auburn placekicker Al Del Greco.