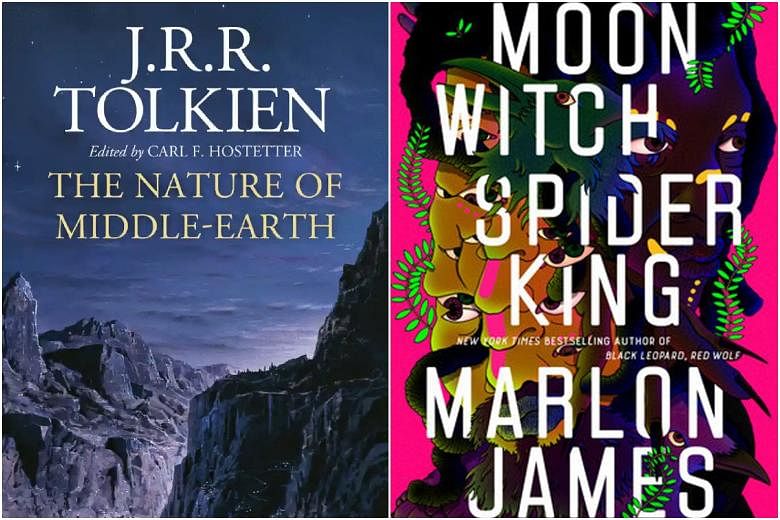 SINGAPORE – Ahead of Tolkien Reading Day on March 25 to celebrate the life and works of fantasy author J.R.R. Tolkien, The Sunday Times looks at seven new books about other worlds.

Much is made of the late J.R.R. Tolkien’s knack for inventing languages, but it turns out the fantasy author was also capable of complicated mathematics.

To create the world of Middle-earth that his books The Hobbit (1937) and The Lord Of The Rings (1954 and 1955) are set in, the British author took pains to calculate details like population growth and maturation rates for the fictional race of the Elves.

These are among the facts readers will discover in The Nature Of Middle-earth, the latest published collection of writings by Tolkien, who died in 1973 – and also likely the last.

Marlon James’ season of the witch

Amid the coruscating cast of characters in Black Leopard, Red Wolf – the first instalment of Jamaican novelist Marlon James’ Dark Star trilogy – one in particular stood out: Sogolon the Moon Witch, a powerful old woman who, depending on which rumour you listen to, is either 177 or 370 years old.

In a stunning flip of perspective, she gets the stage in this sequel that outdoes its already impressive predecessor.

The novel, set in the same dazzling fantasy world drawn from African myth, follows Sogolon as she goes from a nameless, abused girl-child to the feared Moon Witch, who stalks and kills men who do violence to women and children.

Before the sands of time run out

The desert, like space, is a great literary trope. In The Book Of Sand, a new fantasy series by Theo Clare, it is both a physical and metaphysical challenge to the hotchpotch family at the centre of the tale.

The Dormilones are not related by blood, but by a strange twist of fate which has brought together a multicultural assortment of people in a desert called the Cirque.

This ragged band, competing against other “families”, is searching for the Sarkpont, a mysterious sacred basin, before the time limit runs out in this desolate landscape with wrecked versions of Earth cities scattered through its reaches.