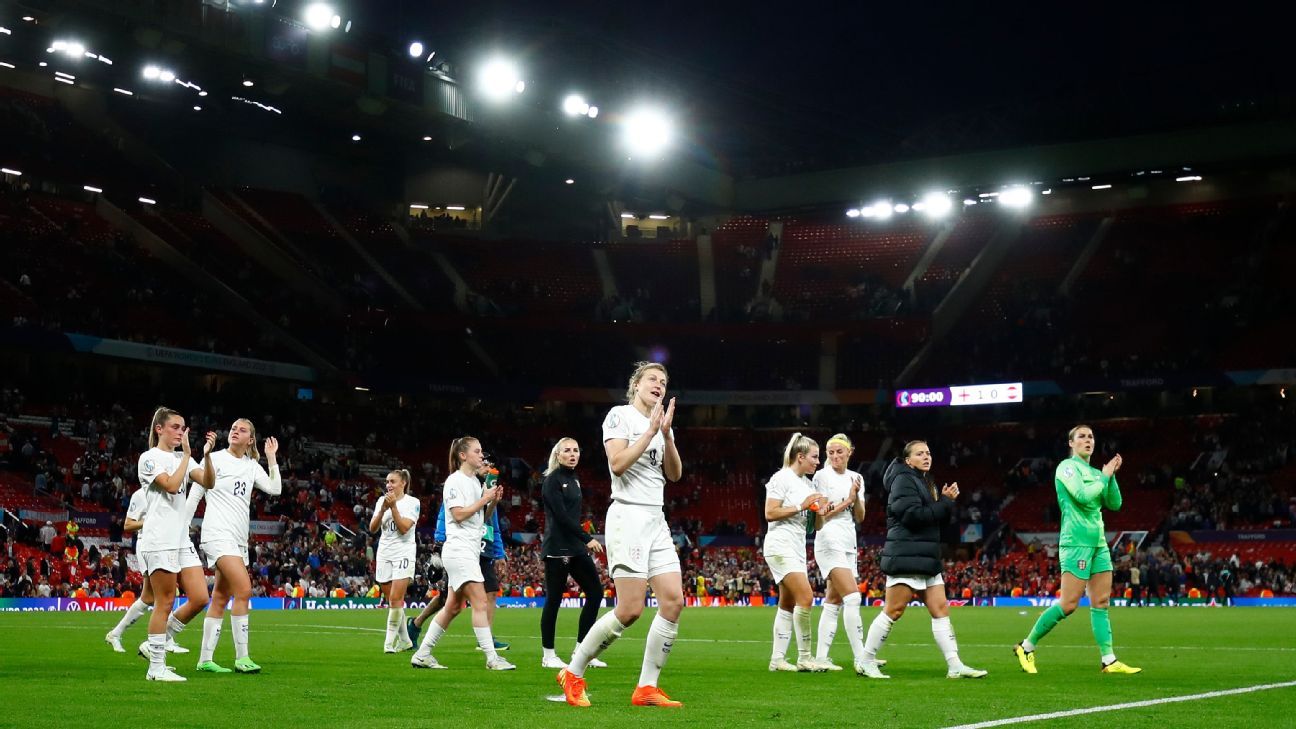 The English Football Association (FA) has released a statement acknowledging that players “will be taken into consideration” for future kit designs after concerns from England’s squad about wearing white while on their period.

It was against the backdrop of the tennis conversation around Wimbledon’s antiquated all-white rule that England women’s players, fresh off of their opening match 1-0 win over Austria, were questioned about the classic all-white England kit.

Following the tournament opener, goalscorer Beth Mead said: “It’s something we’ve fed back to Nike, hopefully they’re going to change that [the colour]. It’s very nice to have an all-white kit but sometimes it’s not practical when it’s the time of the month. We deal with it as best we can. We’ve discussed it as a team and we’ve fed that back to Nike.”

The Nike kits England are wearing this summer are bespoke for the women’s team, the sportswear manufacturer having committed to tailor-made kits for all the women’s national teams they supply ahead of the 2019 World Cup.

This tournament is no different for Nike who have provided six nations (England, Norway, Finland, Netherlands, Portugal and France) with custom kits for the Euros. Yet of those six nations, four wear home kits complete with white shorts.

Following a request for comment, the FA released a statement on Saturday which read: “We recognise the importance and want our players to feel our full support on this matter. Any feedback made by them will be taken into consideration for future designs.

“We will continue to work in close consultation with our partners Nike, while still following guidance from tournament organisers where possible in terms of colour choices.”

Speaking after England’s win, Bayern Munich’s Georgia Stanway added: “It’s difficult, because we associate England with white. The home kit is unbelievable, it looks really nice. I think that’s something that we can speak about as a full squad, as a group of girls.”

With women’s football being accepted more and more into the mainstream, the game — just like the wider body of women’s sports — has been slowly breaking down the last remaining taboo: menstruation.

A concerted push in sports science has finally begun to account for and research, not just for the specificities of women’s bodies and how they respond to the stresses of sport and training, but the added impact of menstruation on athletes.

Beyond the obvious of aches, pains and bloating, the research has been directed into how more susceptible women are to injury during different parts of their cycle.

With this going on in the background, fans have become more likely to hear female athletes talking about struggling with their period. Lydia Ko talked about “that time of the month” in an interview with the Golf Channel while Monica Puig spoke on Wimbledon’s all-white dress code and the mental impact that can have on female players.

Make picks throughout the Women’s European Championship for a shot at $5,000.
Make Your Picks

According to former England international Anita Asante when speaking to ESPN on the matter, the issue has been raised before in the women’s game.

“I’ve heard people raise this issue before and it’s been shut down, just on the basis of ‘we are one collective so we must all look the same,’ without regarding how it may affect individual girls or women,” she said.

She added: “I think you’ll be hard pressed to find any females who haven’t had an experience when they’ve felt the dread when it’s your time of the month and you’ve got to go play in white shorts knowing that you don’t feel as comfortable in your own skin at that time.

“Ultimately when you’ve got to go out there and perform it can affect the performance because you become extremely self-conscious.”

For Asante, who left the English league in 2009 in search of professional opportunities, the lack of women in the decision making process has left the sport playing catch up, waiting for a time the players feel comfortable broaching all manner of issues that don’t impact their male counterparts.

“Obviously, people who run the game don’t think about the kind of holistic perspective of the athletes they manage. Men don’t typically think about these things because it doesn’t directly affect them, that’s the crux of how I see it.”

The women’s game has come a long way from Sepp Blatter suggesting tighter shorts would bring more eyes to women’s football with the top end of the game finally providing women with kits that fit rather than plunging necklines and shorts that wouldn’t be out of place in an MC Hammer video.

However, there is still distance to go in ensuring female athletes have the correct equipment and clothing to maximise their abilities, whether that be breathable fabric or shorts they don’t have to worry about bleeding through.