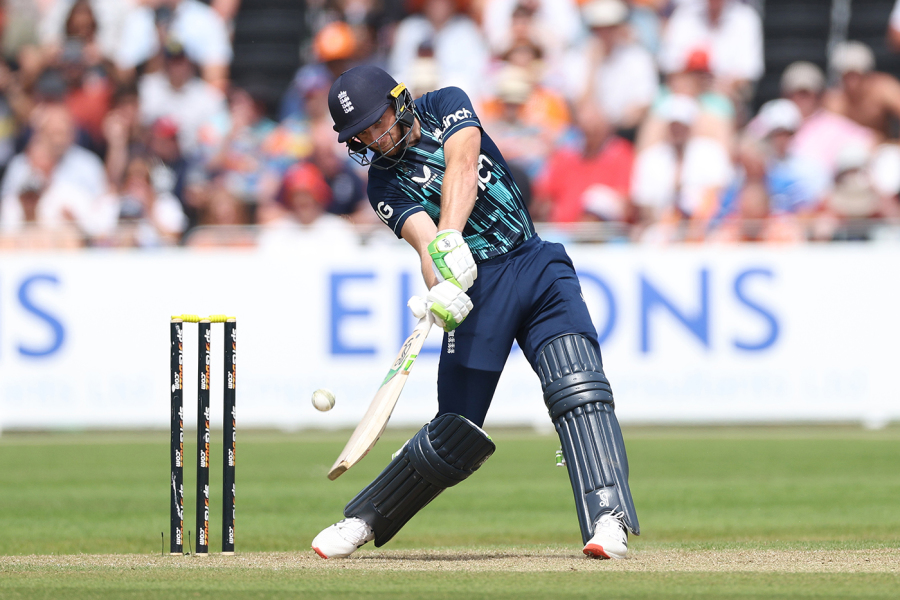 12.50pm Meanwhile, away from all the limelight, England’s neighbours Ireland are in a fair bit of trouble in Malahide. New Zealand tightening the screws with the ball early.

Chris Lawrence: “Just looking at England’s top 7 batsman on paper and looks absolutely solid to make 350 on any pitch. That confidence never transpires into the Indian lineup, even in the present day era. Sehwag, Tendulkar, Gambhir, Kohli, Raina, Yuvraj, Dhoni had that writing on the wall, back in the day. Is it just my opinion?” — That line-up won India the World Cup, although ODI batting wasn’t that way in 2011. But who knows, with India’s new approach – and the boldness of finishers like Pandya – no total is outside limits.

12.40pm What do you feel about the XIs? The ODI World Cup isn’t very far away, and although aren’t bothered about Super League points by virtue of being hosts, they still need to firm it up. And England have just had a new captain in charge in the format, with Morgan gone.

Amit Bansal: “This is a scary England Batting Line up” — Yup, with respectable batting expected from Willey and Carse.

Kohli has a mild groin strain while Arshdeep Singh has right abdominal strain, and so were not considered.

12.32pm The coin flips… and India opt to bowl first. Rohit Sharma says it’s a combination of conditions – which are overcast, and because it’s a green pitch – and the chasing suitability that have prompted that call. Five batters, two allrounders and four seamers comprise his team, with Kohli not playing. Shreyas Iyer will bat at No. 3, Rohit says. Jos Buttler would have bowled first too, and England play Overton, Carse and Willey among their seamers.

Amritpal Singh: “Rahul Dravid should replace Kohli at No. 3” — End of discussion…

12.30pm England haven’t lost an ODI at The Oval in the last seven matches, while India last played an ODI in February. Meanwhile, Graeme Swann reckons the pitch may not be very quick, while it wears a greenish look to help in seam movement.

Dhruv: “I believe Iyer gets the nod to replace Kohli – his numbers in ODIs are stellar and his innings-building ability could be complemented by SKY and Pant at 4 and 5.”

Sahil: “Shardul Thakur could be a worthy choice at 3, if Kohli is unfit given Kohli’s current form” — Now that is what you call trump card…

So if Kohli doesn’t play, who would like to see at No. 3 for India? Maybe a promotion for Pant to have some pinch-hitting? Have a quick say before the toss.

Sanket: “It will be really unfortunate if Virat misses out this game, I think this is the best suited format for him to get back in to the runs. Unlike in T20s where the run rate is always hanging on the head and in Test the surface offers much more to the bowlers, ODI allows you to pace your innings really well, and also there won’t be much help for the bowlers. This will also be good opportunity for Rohit to score some runs”

Scott: “Can I just see it’s good to see Root back in the white ball squad? Seems like it’s been a while because of all the rest and rotate and burdens of captaincy!” — With the zillions of T20 leagues, the hundreds of T20Is, the WTC, and then ODI cricket, it’s always difficult to recall who last played which format.

12.20pm Former England left-arm spinner Ashley Giles is already pondering on teams’ planning for the 2023 World Cup, but as Shashank Kishore’s analysis highlights, India have some questions to answer in the coming one-and-a-half years.

The toss is just 15 minutes away, a lot of time to get your fantasy teams fired up. Go with Root as captain and Dhawan as vice-captain is what we suggest.

Vikram: “If India extends its “No Holds Barred” approach in the ODI’s, this series will be mouth-watering. Still, England are slight favourite, since they are the pioneers of this approach.”

12.10pm England have Bairstow, Root and Stokes back, and as Ashish Pant’s preview mentions, they will be in full mood to avenge the T20I series loss, even as India try to manage Hardik Pandya’s workload, who is set to play his first ODI in nearly a year.

Colin: “”the animated Andrew Miller?” Is he a cartoon character? He’s always entertaining!” — Ever a doubt about his tehcniques?

There are still doubts lingering over Virat Kohli’s participation in this match, although we haven’t heard any official word yet. But here comes India’s latest T20I centurion Suryakumar Yadav: “Really happy with the way things went in the last T20I. But there was a slight opportunity to take the game… in the second-last over. The way things are panned right now… I just thought of being fearless”

12pm The forgotten, fading format. Welcome to the first ODI of India’s tour of England, with 50-overs cricket getting sandwiched in between the history and tradition of Tests, and the commercial value and entertainment of T20s. But here we are at The Oval after the rescheduled Test and the three T20Is, with teams – ummm – starting to look towards (another) World Cup, albeit in 2023. This is Himanshu saying hello, with the animated Andrew Miller all set to join soon.