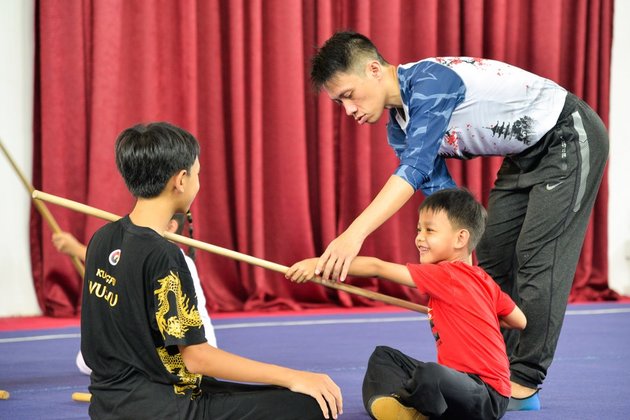 Wushu, or traditional Chinese martial arts, is popular in Indonesia. Gogi Nebulana, who won gold at the 2007 Wushu world championships in Beijing, says “I hope I can enroll at least 500 students” and is determined to take his best students to China.

JAKARTA, March 11 (Xinhua) — Fourteen-year-old Govin Quinebulani may not be fighting “tooth-and-nail” to realize her dreams, but fighting she certainly is.

Since the age of three, Govin has been practicing the traditional Chinese martial art of wushu. For as long as she can remember she has attended tournaments and dreamed of competing for the Indonesian national team.

Also known as kungfu, wushu is a graceful and expressive set of movements akin to floor gymnastics. Highly photogenic, the sport came to the world’s attention during the 2008 Beijing Olympics. Wushu is often performed with swords or staffs, and completely unlike the version widely seen in action movies. But it is also a full-contact sport, highly reminiscent of big screen fight scenes, with strictly no biting or scratching allowed.

Govin was introduced to Wushu by her father Gogi Nebulana, who won gold at the 2007 Wushu world championships in Beijing.

Wushu is popular in Indonesia, but really took off at the 2018 Asian Games in Jakarta, where the national women’s team won the first-ever gold in the taijiquan and taijijian combined event. Wushu clubs are now to be found across all of the country’s major islands.

“I began training when I saw my dad was training alone,” she told Xinhua. “He looked cool, so I joined in. I started doing random movements and fell in love with it.”

Govin trains almost every day at Harmony Wushu Club in the Jakarta satellite city of Bogor. The club was founded by her father. Her 9-year-old sister Gojun has been practicing there for five years already. Govin has won a number of medals in local competitions and expects to compete in this year’s inter-regional championships. In 2019, she and her cousin went to Beijing for two months of elite training.

“We trained for three hours, three times a day every day. It was a great experience for us because we learned so many things,” she said.

WHERE IT ALL CAME FROM

Gogi Nebulana started practicing Wushu at the age of Five and began teaching others at 17. Although Nebulana is of Chinese descent, he did not speak Chinese before he went to Shanghai for two months in 2004. He now understands Chinese culture, speaks some Chinese and comes into contact with many more Wushu lovers.

“My Chinese name is Xu Tianhu,” he declared with pride.

Before the pandemic, Harmony Wushu had 300 members, but numbers are down to about 120. “I hope I can enroll at least 500 students and then I will be able to build a bigger school like the Wushu academies in China,” said Nebulana.

“They will appreciate Wushu even more once they know about where it came from, and how it all began. There are deep meanings behind these powerful movements and I want my students to learn to love them, just like I did,” he said.