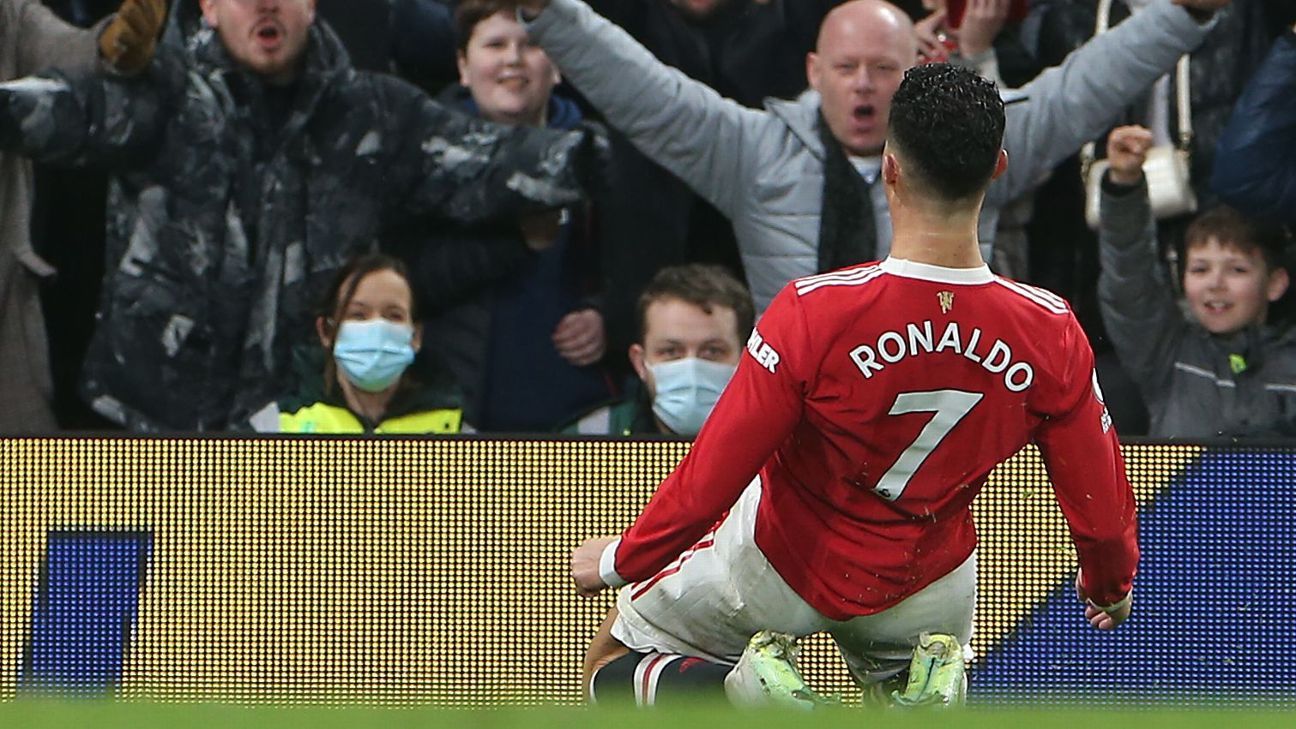 Manchester United kept their European hopes alive as Ralf Rangnick’s side returned to winning ways with a vital 2-0 win over 10-man Brighton on Tuesday.

The Red Devils were poor in the first half and could have been dead and buried had the visitors taken the chances. The best of them fell to Jakub Moder, who was twice spectacularly thwarted by David de Gea either side of a Jadon Sancho effort.

But United upped the ante after the break, and the Seagulls undid all their hard work in a frantic three minutes as Cristiano Ronaldo finished emphatically before Lewis Dunk was dismissed for hauling down Anthony Elanga.

The men in red continued to live dangerously, and Moder shook the home crossbar, but Bruno Fernandes struck with virtually the last kick of the game as United finally clung to a lead.

United’s form against Brighton is something else. That’s seven straight wins now against the Seagulls as the hosts hauled themselves back into the top four and put more breathing space between them and the teams looking to qualify for the Champions League.

United were second best in every department in the first half and could have been in real trouble had Brighton been more clinical. The home side rode their luck despite being a goal and a man to the good, and were about three inches from once again finding themselves level after going ahead.

Manager rating out of 10

Ralf Rangnick, 6 — The United boss did his best to inject more tempo into his side’s play from the sidelines but with little success in the opening 45. Whatever he said at the break had the desired effect, though as his side finally started to get after their opponents, at least in spells.

GK David De Gea, 8 — Captured the hosts’ early nerves when he scuffed a poor clearance straight to a blue and white shirt, but he more than redeemed himself with a couple of huge saves to deny Moder from close range not once but twice.

DF Diogo Dalot, 7 — One of few United players who seemed determined to play with some urgency. It was like that from the off as he drove through the midfield and fired the ball over to Elanga on the left.

DF Victor Lindelof, 5 — Passive. Made Harry Maguire work hard to keep in an over-hit pass out to the left and found himself marking empty space as Alexis Mac Allister scuffed another big chance straight into the arms of De Gea.

DF Harry Maguire, 7 — Took charge at the back and won a couple of early battles with Pascal Gross and then Neal Maupay. Made a nuisance of himself from set pieces without reward and eased the pressure with a big header to repel Mac Allister’s inviting delivery.

DF Luke Shaw, 5 — Struggled to cope with some smart exchanges between Gross and Mac Allister as the soaring Seagulls continued to enjoy success down United’s left side. Found himself chasing after the shadow of Yves Bissouma, who lashed just wide.

MF Scott McTominay, 6 — Forced a rare stoppage in a relentless first half when he caught the lively Mac Allister. Much more effective in the press after the interval, and he did well to crowd out Bissouma, which allowed Ronaldo to take advantage.

MF Fred, 5 — Almost gifted the visitors the perfect start when he tapped a dreadful pass into the middle that was latched onto by Mac Allister, but De Gea bailed the Brazilian out with a fine save from Moder. A bit of a sloppy evening in truth.

MF Jadon Sancho, 7 — Should have put the Red Devils in front with his third goal in as many games on home turf, but he fired straight at Robert Sanchez when he had to score. He played with bags of confidence, though, and caused problems with a couple of blistering runs.

MF Bruno Fernandes, 7 — Showed perfect control to pluck Dalot’s pass out of the air and moved up about three gears in the second half as United took control. Should have buried the game much earlier than he eventually did, but it was a finish worth waiting for.

MF Anthony Elanga, 7 — Didn’t have the strength to hold off Marc Cucurella in pursuit of Sancho’s slipped pass in behind, but he played positively and showed a desire to run at defenders whenever he got the chance, which was a key factor in Brighton’s capitulation.

FW Cristiano Ronaldo, 8 — Almost created the perfect response to Brighton’s early pressure when he pounced on an Adam Webster error and teed up Sancho with a lovely backheel. Rewarded his side’s bright start after the break when he rifled a fine finish past Sanchez.

DF Alex Telles, NR — Replaced Sancho in the 79th minute and immediately charged towards the Brighton penalty area in pursuit of McTominay’s dangerous cross towards the back stick.

MF Paul Pogba, NR — Replaced a sorry-looking Fred to rapturous applause in the 73rd minute and he instantly imposed himself, firing his first touch into a blue shirt before recycling the attack on the right-hand side.

FW Marcus Rashford, NR — Replaced Elanga in the 79th minute and provided some much-needed fresh legs against a Brighton side that refused to roll over.