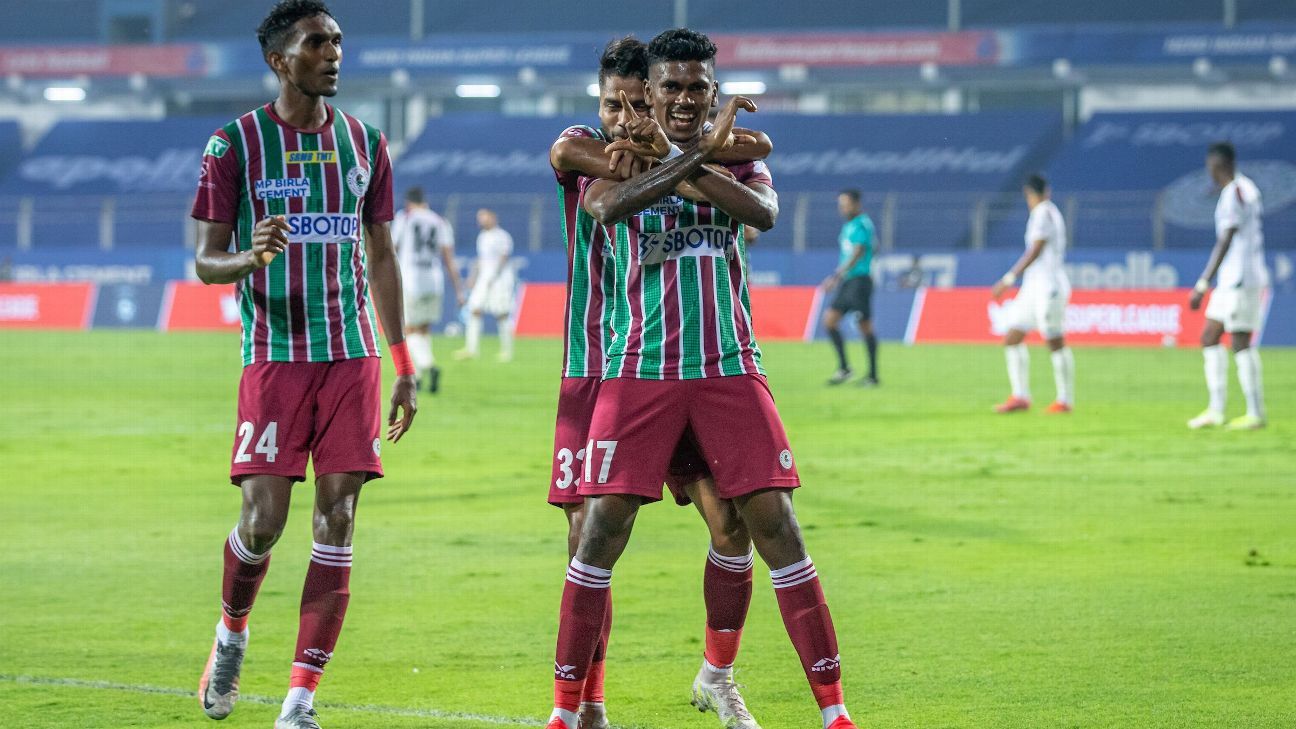 A record tumbles. A manager gets sacked. The league leaders lose one and win one in the space of three days. Just your average week in the Indian Super League, then. We muse:

Colaco makes football look like fun, and isn’t that the whole point of this shebang? Add goals, match-winning goals at that, to the mix and well… Ooo la la.

There’d always been a crackle of excitement that seemed to fill the air every time the ball landed at his feet. Earlier, that crackle had been filled with the promise of potential, but that’s now slowly being replaced by the promise of tangible, game-impacting moments. Given the freedom of the attacking third by Juan Ferrando, Colaco has become ATK Mohun Bagan’s key attacking outlet. And he’s delivering. This past week was arguably his best ever, as he produced two goals and an assist in two player-of-the-match (for us, at least) performances that saw Bagan climb to second in the table.

Colaco is now the joint-third-highest scorer this season (7). And he’s just getting started.

Owen Coyle is the real deal

We knew this, of course, but Owen Coyle is a fine, fine manager. He has quietly led his Jamshedpur side to fourth in the table, (with games in hand over most of their direct rivals) and are strong favourites to make the playoffs at this stage. The free-scoring adventure from the start of the season has been replaced with a more rugged lets-just-go-get-that-win mentality — necessitated, of course, by the stop-start nature of this season.

They continue to remain an entertaining watch and a very tough-to-break-down side. This week, they thrashed high-flying Kerala Blasters 3-0, dominating them across the pitch in a performance that underlined Coyle’s class.

Hyderabad FC have scored more goals (36 in 16) than any other team, quite comfortably, and conceded the second fewest (16). They have a goal difference of 20; the next highest is 8. As a new week starts, Manolo Marquez and his band of merry men in yellow remain atop the standings, deservedly so.

He’s not having the best of seasons. He’s missing chances that he’d usually have tucked away without batting an eyelid. He’s not on penalty duties anymore. He just recently forced himself back into the starting XI. In spite of all that, he broke the league’s all-time scoring record a couple of weeks back. He’s now become the first person to score 50 ISL goals.

Even when he’s not at his best, it’s just impossible to keep Sunil Chhetri out of the headlines.

Igor Angulo is back. That means Mumbai City are too.

After a rip-roaring start, Mumbai City went on a seven-game winless run that saw them drop sharply down to the bottom half of the table. They broke that painful streak last week, but a narrow 1-0 win over Chennaiyin still served up plenty of doubts. Des Buckingham needed something emphatic to kickstart their title defence, and boy did he get it on Sunday. A brace each from Bipin Singh and Igor Angulo saw them run over Odisha 4-1 in a performance that took City’s fans back to December’s dominance.

What was even more encouraging though was Angulo’s performance, and the way he took his goals — that second one especially, where he took a defender and the goalkeeper out of the equation with a superb fake that transitioned immediately into a powerful toe-poke. If this was an indication that Angulo has found the kind of form we all know he’s capable of hitting, City are well and truly back in the hunt.

Derrick Pereira was parachuted in to salvage FC Goa’s season after Juan Ferrando abruptly decided to up and leave for Bagan. As long-time technical director of the club, he was better prepared than anyone, but in this COVID-hit start, it’s been a hard slog. He has got his team playing some lovely football, but often without the results to go with it. This week, he finally got the whole package. A 5-0 thrashing of Chennaiyin, the scoreline (finally) a just reflection of Goa’s utter domination of the football.

In case any of us had forgotten, Derrick Pereira served us a reminder of just how good a coach he is. Keep him in that dugout next season, Goa?

Who does the managerial merry go-round help?

Speaking of keeping someone in the dugout, in the seven and a half years of its existence, the ISL has seen 63 managers (including caretakers and interims) take charge. 44 of those were (or have been) around for a season or less. This, in a league that had 8 teams for three seasons, 10 for three and now 11 for one and a half. Whichever way you look at it, those are large numbers. Unsettlingly large numbers.

The ISL is already one of the shortest top tiers in the world – four months stretched to its limit with a month or two of pre-season – and then we have a vast majority of upper managements who are evidently way too trigger-happy (there are exceptions, of course).

Who does this help?

Certainly not the managers, who have no time to adapt, to grow into their roles. Not the players, who have to learn and unlearn and relearn. Not the fans, who struggle to pin a footballing identity to their club. Then why do it?

You could argue that this is the job, of course. Everyone takes it up knowing what they are facing. But when judging a manager, maybe we need to take into account just what kind of time-crunch they are under from the get-go.

We bring this up now because Chennaiyin unceremoniously sacked Bozidar Bandovic on Tuesday following their shellacking at the hands of Goa.

Bandovic had had a promising start, building the kind of defence he’s famous for – one that these pages had praised quite a bit – before injuries and COVID and rescheduling stopped whatever momentum he had been building up and gaps started to open where just weeks previously there were none.

The raw numbers support the management’s decision – Chennaiyin have scored the lowest (14 in 16 games) and conceded the third most (25). They are well off the pace for the playoff places (19 points, six behind fourth-placed Jamshedpur who have two games in hand). They were also, on balance, the most boring watch in the division.

Could Bandovic have been given more time? Would he have succeeded if not for the stop-start nature of this season? We’ll not know for sure, of course, but the more concerning thing is that there’s no real indication that India’s top division will give coaches the benefit of doubt… or perhaps more pertinently, that of time, anytime soon.