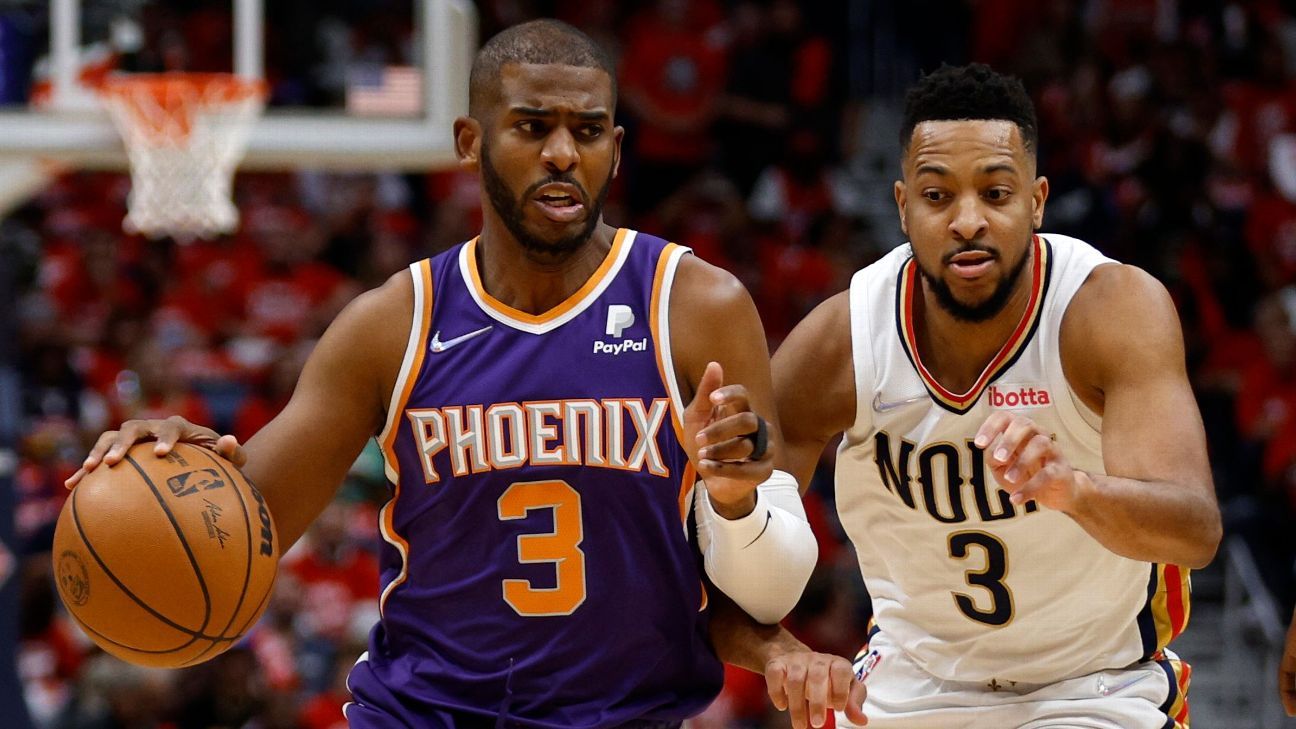 NEW ORLEANS — With the top-seeded Phoenix Suns in some danger with one star hurt and an ascendant Pelicans team giving them problems, future Hall of Famer Chris Paul delivered a signature series performance, including the best shooting game of his career to finish the close out.

Riding his favorite play, Paul made NBA playoff history as he became the first player ever to make 14-of-14 shots on his way to 33 points to lead a comeback 115-109 Game 6 victory Thursday night.

Only Wilt Chamberlain has made more without a miss, once going 18-of-18 and another time 16-of-16, both in regular-season games.

Paul’s biggest was his last one, a 10-foot pull-up in the lane with 28 seconds left that bounced around the rim before dropping. Combined with two 19-point fourth quarters earlier in the series and a 16-point first half in the pivotal Game 5, Paul was clearly the difference-maker in getting his team to the second round.

It was needed as Devin Booker missed three and a half games with a hamstring injury. Booker battled through it to return Thursday and wasn’t quite himself as he scored just 13 points. But he did make a vital 3-pointer with 1:42 left that gave the Suns the lead for good, off a feed from Paul, of course.

The Pelicans threw everything at him but Paul scored on seven different defenders. Most of them came in his trademark style, from the midrange off screens set by Deandre Ayton as he repeatedly got to his favorite spots for comfortable shots despite pressure.

The Suns rode the play to a hot streak in the third quarter, making 13 of their first 14 shots after halftime to erase a 10-point Pelicans lead. Paul made six jumpers in the quarter and Ayton, who started the game making his first seven shots, made two. Ayton finished with 22 points on 10-of-12 shooting, a devastating 1-2 punch.

Overall, Paul went a combined 18-for-18 on field goals and free throws, becoming just the fifth player to achieve that perfection in the shot clock era and the first to do so in the playoffs, according to ESPN Stats & Information research.

The Suns also changed their style on Pelicans’ star Brandon Ingram, who was hard to handle for most of the series. Coach Monty Williams threw double teams at him and Ingram struggled to get space as he made just 8-of-17 shots for 21 points with 11 rebounds.

The Suns will face the winner of the Mavericks-Jazz series.