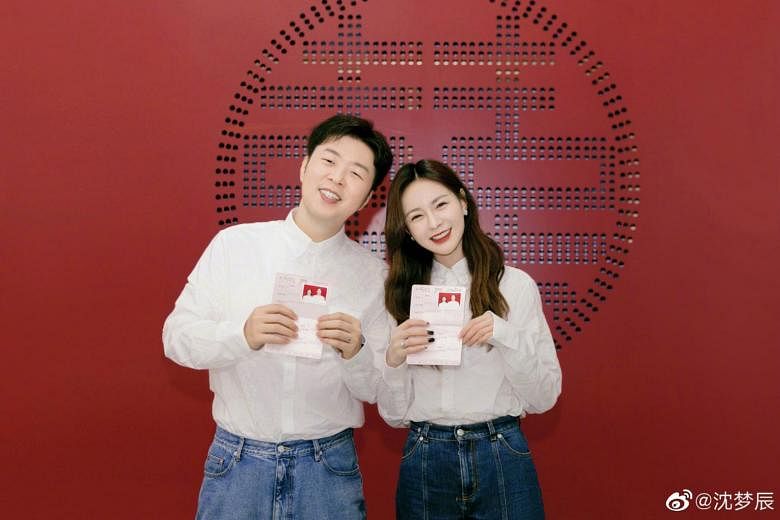 Both Shen, 32, and Du, 34, made their simultaneous marriage announcements on their respective Weibo accounts at exactly 6.13pm on Thursday (Feb 17), a reference to Shen’s birthday on June 13.

The couple each posted six photos on their respective Weibo accounts, including their official wedding photo and a photo of them holding their marriage booklets with the number 3170 – the number of days they have been together – between them.

The photos were captioned in Chinese: “The magpies in the sky are called ‘guai guai’.”

In Chinese culture, magpies deliver good news. Shen and Du are known to address each other affectionately as “guai guai (goody-goody)” in private.

Du gained fame as one of the hosts of Chinese variety show Happy Camp (1997 to 2021), while Shen first made her name in Hunan Television’s beauty pageant show in 2008.

She took part in the first season of reality show Sisters Who Make Waves in 2020, but was eliminated in the second round of performance.

Their relationship came to light after they were seen travelling together in South Korea in 2014.

They were spotted in 2019 taking wedding photos in Barcelona, Spain, but they explained that they had been invited to take part in a wedding fashion week there and do a photo shoot for a magazine.

Nuptial rumours had been sparked earlier on Thursday by media reports that Shen and Du spent Chinese New Year together in her hometown in Xiangxi prefecture in Hunan province, with the parents of both present at a meal.