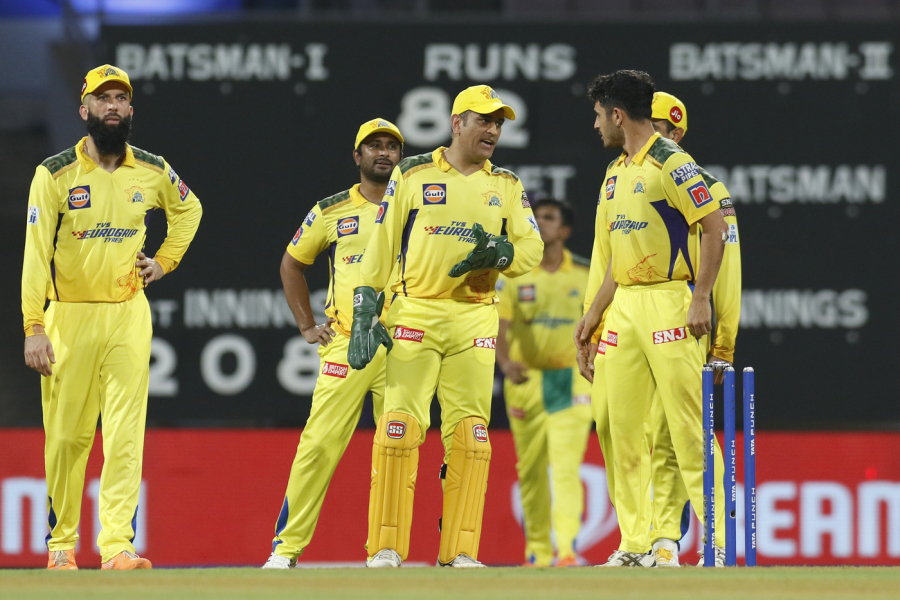 Apart from allowing the team to test the bench strength, Kieron Pollard’s form may be a reason for not being picked. Here’s a Maruti Suzuki ASKcricinfo stat to back it up: Pollard vs spin and pace at IPL 2022

CSK are going in with the same team

MS has the coin, heads is the call and it heads. MI win the toss and choose to field

7:03 pm: After a minor issue with the floodlights, it is time for the toss.

Tristan Stubbs has been handed a cap and will be making his debut for MI.

Pitch and Conditions: Matthew Hayden says there is live grass on the wicket which will allow seamers movement. It isn’t dry and spinners will come on to slow the game, they might not get as much turn. 8 out of the 10 wins have come from teams setting the score. So batting first is good and 175 is a good score.

Atul: “Is Dwayne Bravo on a hattrick today?” He did get two off two. Thilak, our scorer, doesn’t it is as it’s a different game. I’m with him on that opinion and here at comms. PDP will come in later.

Kalkitha: “Last 8 matches of CSK carry the pattern of LWLWLWLW. A win by CSK today will break the pattern. “

Sanket: “The absence of jaddu mean csk won’t have that luxury of another bowling option, with Ali dube bowling 5th bowlers means you can target this weak csk bowling line up. And dew in the second innings would make this tougher”

Afeef: “The spotlight will be on birthday boy Kieron Pollard to deliver”

Moeen Ali interview with the host broadcaster: It’s a huge game no matter where you are on the table. Both teams have not played well in the tournament so far, it is a must-win game for us and I hope to do well. I have worked hard on bowling, more than before. But I know there might be a beating around the corner (laughs). We have missed stability in the batting, Faf (du Plessis) used to do it last year but it is good to have Devon Conway and Ruturaj Gaikwad finding form. It’s shown us that when the top order scores, you can put up good totals that can be defended. The fielding mistakes and inconsistency with the bat have cost us. We could not get going early on and repeated errors which led to our downfall. This has to be a case of all cylinders firing, and the rivalry with MI provides extra incentive to do well.

Girish : “Early prediction: CSK won the toss and elect to bowl first. MI will score 167/7 in 20 overs. CSK will win the match with 6 wickets and 3 balls to spare with finishing in his style”

Anish: “MI should play fearless cricket from ball 1. Hope Rohit can score big tonight. Much needed for MI and India. “

6:30 pm: Hello and welcome to ESPNcricinfo’s live coverage of today’s IPL game between Chennai Super Kings and Mumbai Indians. MI are out of the tournament and will be playing for pride and may test their bench-strength. CSK have very thin mathematical chances of making it to the playoffs but as MS Dhoni said after the last game, he is not good at maths and they will take it one game at a time. For details on the teams’ forms and some of the key matchups, including one with Kieron Pollard, the bowler in focus, check out Hemant Brar’s Preview. Another key point is Ravindra Jadeja’s absence for CSK, he has been ruled out of the tournament with an injured rib that he picked up during their game against RCB.