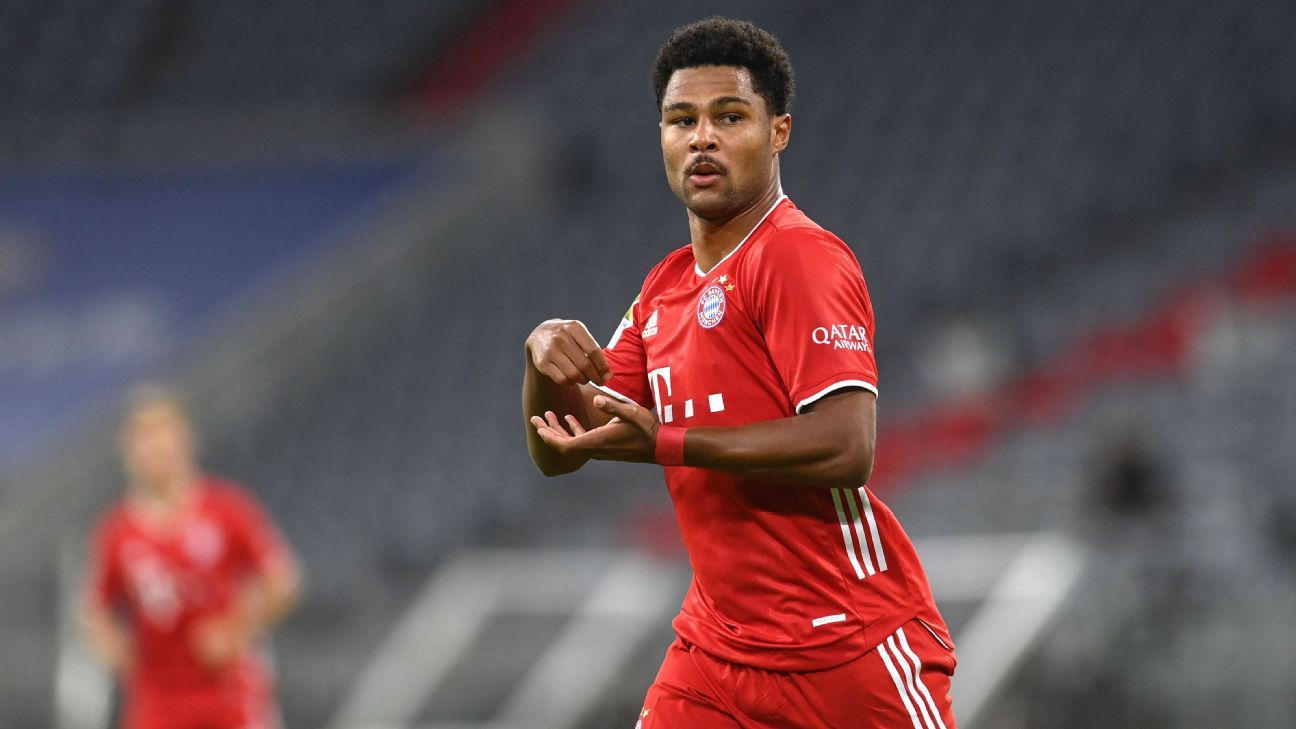 Chelsea and Tottenham Hotspur are ready to take advantage of Serge Gnabry‘s contract situation, as talks with Bayern Munich over an extension stall, according to Bild.

The 26-year-old will enter the final year of his contract in the summer, but despite the Bundesliga side being keen to extend his stay at the Allianz Arena. Bayern are struggling to agree to personal terms, with reports that the winger and club are some ways off in negotiations over an improved salary.

Just over 10 months remain before Gnabry can be officially approached by a team in Europe, and that has seen the two Premier League sides begin to circle in a bid to force Munich’s hand. If a deal isn’t reached by the end of the campaign, they may be resigned to letting him go for a low price to avoid losing him on a free transfer.

The Germany international has remained a key part of Julian Nagelsmann’s side this season, contributing to 16 goals in 31 appearances across all competitions.

13.38 GMT: Antonio Conte reacted to Tottenham’s loss at Burnley on Wednesday by hinting that he could quit the club (see 11.29 GMT). He couldn’t really leave, could he?

Julien Laurens and Nedum Onuoha discuss Antonio Conte’s position as Tottenham manager after he made some strong comments after defeat to Burnley.

12.33 GMT: AS Roma will renew their attempt to sign Arsenal midfielder Granit Xhaka at the end of the season, according to Calciomercato.

Roma tried to sign the Switzerland international last summer, but Arsenal would not budge on the €15m transfer fee they wanted for their former captain.

Xhaka has a contract with the Gunners until 2024, but he has started just 10 Premier League games this season and has received two red cards, so manager Mikel Arteta may well reconsider the 29-year-old’s place in the squad this summer.

11.29 GMT: Tottenham Hotspur manager Antonio Conte appeared to question his own future at the club after his side slumped to a fourth loss in five Premier League games with a 1-0 defeat in pouring rain at Burnley on Wednesday.

Saturday’s 3-2 win at Manchester City briefly lifted the gloom of three successive defeats, but Spurs failed to fire up against relegation battlers Burnley and went down to Ben Mee’s 71st-minute header.

Conte described the current run as “unacceptable” and raised doubts about his ability to turn around the club’s fortunes, having been hired in November to replace Nuno Espirito Santo.

“We are doing everything to change the situation, but it’s not enough. Four defeats out of five is not good enough. This doesn’t happen to me,” the Italian, a serial winner with Juventus, Chelsea and Internazionale, told reporters.

10.38 GMT: Juventus are to hold important talks with Paulo Dybala and other players regarding their contract extensions at the end of this month, according to the club’s CEO.

Dybala has been holding talks with Juve over an extension since 2020. The Argentina international’s current deal expires this summer and there have been reports that the forward could leave Juve after seven seasons at the club.

A reported target of Manchester United and Tottenham in previous transfer windows, Dybala has also recently been linked to Barcelona.

“At the end of February, we will meet all of the players whose contracts are about to expire,” Maurizio Arrivabene told Sky. “We look ahead and besides that of Dybala, we will also discuss the contract renewals of other players. We will do it in the right time and with an eye to the future.”

Asked if he was optimistic about the upcoming talks, Arrivabene added: “Contracts are made in two, there can be optimism on one side and pessimism on the other and vice versa. The renewals involve a negotiation and, each party that participates in it, sets itself a goal.”

Johnson has impressed this season for the Hammers, starting in Premier League wins over Spurs, Liverpool and Chelsea.

The 22-year-old was set to be out of contract in the summer, but West Ham have taken up a two-year option to extend his stay at the club until at least 2024.

08.51 GMT: Manchester United remain convinced they can attract their top targets — such as England duo Declan Rice and Harry Kane — to Old Trafford in the summer even if they miss out on a place in the Premier League top four, sources have told ESPN’s Rob Dawson.

Back-to-back wins over Brighton and Leeds United have moved Ralf Rangnick’s side into the Champions League places, although Arsenal, Tottenham Hotspur and Wolverhampton Wanderers are within seven points and all have games in hand.

Sources have told ESPN that United are prepared to spend in the summer regardless of whether they qualify for the Champions League.

Targets like West Ham midfielder Rice and Tottenham Hotspur striker Kane have made it clear they want to play in Europe’s top club competition but United believe they are still in a position to pull off marquee signings even if they miss out on a place in the top four this season.

Sources at United point to their capture of Paul Pogba for a world record fee of £89.3 million in 2016, ahead of a season in the Europa League, as evidence that they would not have to change their transfer plans depending on whether or not they secure Champions League football.

08.00 GMT: Barcelona coach Xavi Hernandez said Ousmane Dembele has been an “exemplary professional” since he took over after restoring the France forward to the side following a standoff over his contract renewal.

Dembele, 24, was jeered by Barca supporters earlier this month when he was an unused substitute in the win over Atletico Madrid and again when he came off the bench against Napoli last week. Xavi then handed him his first start since Jan. 12 at Valencia on Sunday despite the uncertainty which surrounds his future at Camp Nou, with his deal up in the summer.

“He looks happy,” Xavi said in a news conference ahead of Thursday’s Europa League tie against Napoli at the Diego Armando Maradona stadium. “He is an exemplary professional. I have not had a single problem with him and I have heard all sorts. That he has not been professional, that he doesn’t take care of himself… it is the opposite. He trains well and he is positive around the group.

“As for the rest, let’s see. His deal is up at the end of the season and [what happens] depends on him and the club. All I can say is that he is a player I really like.”

Dembele has so far turned down all of Barca’s offers to renew, which led director of football Mateu Alemany to tell him to find a new club in January.

– Paris Saint-Germain have joined AC Milan in the race and are monitoring the situation of Hugo Ekitike, reports Gazzetta Dello Sport. The 19-year-old forward’s form for Reims in Ligue 1 has seen him contribute to 11 goals directly in 21 appearances, with performances that have drawn a lot of attention from around Europe. Ekitike was linked with West Ham United in January.

– The Houston Dynamo sent general manager Pat Onstad to the Wanda Metropolitano on Wednesday night to watch Atletico Madrid’s Hector Herrera ahead of a possible transfer, reveals Tom Bogert. It was reported on Sunday that the MLS side had made an official offer to sign the 31-year-old midfielder, who played all 90 minutes in the 1-1 Champions League draw with Manchester United, and talks could now advance over the next few days with Houston stepping up their approach for the Mexico international.

– Cristian Pavon is nearing an exit from Boca Juniors, with reports that his agents are set to meet with Atletico Mineiro on Thursday. Cesar Luis Merlo reports that the final details of the deal are being finalised, with the 26-year-old winger expected to soon complete a move to the Brasileiro Serie A champions.

– The contract saga involving Marcelo Brozovic is expected to finally be coming to an end, according to Nicolo Schira. Despite interest from Barcelona and PSG, the latest suggests that a deal has been agreed and is now in its final stages before being officially announced. The Croatia international is expected to sign a four-year extension that will keep him at Internazionale until 2026.

– Toronto FC is facing pressure from European clubs with interest in Jahkeele Marshall-Rutty, writes TSN. It is reported that the 17-year-old forward trained with Premier League sides including Arsenal and Liverpool during the offseason, and that they are now monitoring his situation in Major League Soccer. Toronto is looking to hold out for at least $20 million to part ways with the talented youngster.