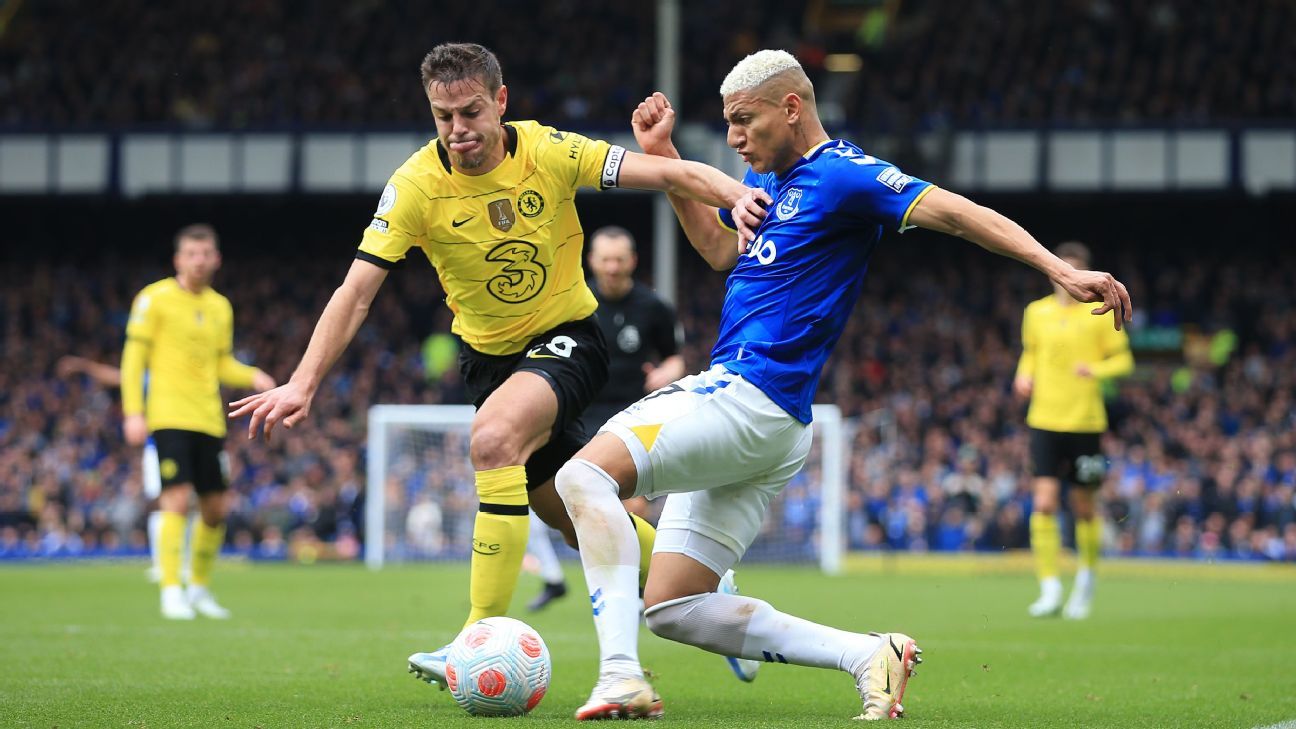 Chelsea were made to wait to secure a top-four finish as they suffered a 1-0 defeat on Sunday against Frank Lampard’s Everton, who were fighting for Premier League survival at Goodison Park.

A tense first half saw not much created by way of chances, with Chelsea struggling to bypass a home side who looked to craft opportunities through individual wing play from Anthony Gordon and Demarai Gray. Five yellow cards summed up the opening period as both sides were heavy with challenges as well as off-the-ball antics, and that made for a scrappy half where Chelsea failed to register a single shot on target.

A nightmare start to the second half saw Cesar Azpilicueta hesitate on the ball with Richarlison applying pressure, and the Brazil international claimed maximum value with a calm finish past Edouard Mendy. It was nearly 2-0 moments later when Vitaliy Mykolenko was presented with a golden chance, only to miss the target from close range.

Chelsea came close to levelling the scoring as Azpilicueta reacted first to Mason Mount‘s volley, only for Jordan Pickford to produce the first of two excellent saves in quick succession.

Those two chances for Chelsea turned out to be the best chances of the game for the Blues, who pressed forward in the seven minutes of added time, where Hakim Ziyech‘s effort drew another superb stop from Pickford, and Everton were able to hold on from that point as their defence dug deep to lock up what could be a crucial three points.

Thomas Tuchel’s side finally offered a response to Everton’s bright start in the second half, and they were unfortunate not to score after Mount’s volley struck the inside of the post.

Chelsea often fell into the home side’s trap of making the game scrappy. Five bookings were handed out in the first half, with the visitors playing a part in that by not keeping their cool as well as they could have. The Blues also lacked cutting edge at times by not making the most of their possession dominance.

5 — Tuchel lost his head when a foul was given against his side, and that preceded a needless on-pitch scuffle that saw Mason Mount and Cesar Azpilicueta booked. Chelsea looked to be cunning with fouls off the ball, but that seemed to benefit Everton more.

GK Edouard Mendy, 6 — The goalkeeper didn’t have too much to do as he got down comfortably to save Gray’s tame effort in the first half. Closed down the angle well to stop Mykolenko from making it 2-0.

DF Antonio Rudiger, 7 — The Germany international was swift to read the play and utilised his pace to ensure any balls played in behind were quickly attended to. Everton’s forwards struggled to threaten him.

DF Thiago Silva, 7 — A brave block saw the 37-year-old launch his body towards Abdoulaye Doucoure, who hit a volley with some venom. Another impressive defensive display from the consistent Chelsea star.

DF Cesar Azpilicueta, 4 — Lost his composure in moments that helped make the game scrappy amid a tense atmosphere at Goodison Park. A significant error then cost his side a goal just after the restart.

MF Marcos Alonso, 6 — A defensively solid display from Alonso on the left flank, but he struggled to make as much impact going forward as he has done in recent games.

MF Jorginho, 6 — Jorginho’s defensive work broke up a number of Everton attacks, though he looked to be struggling with a minor injury before being replaced at half-time by Mateo Kovacic.

MF Ruben Loftus-Cheek, 7 — Powerful running from the midfield helped set Chelsea up on some counter-attacks, with Everton’s midfield struggling to deal with the 26-year-old’s physicality.

MF Reece James, 7 — A solid display saw James often the man to stop the danger, getting a vital block against Richarlison to prevent the deficit from doubling. Carried the ball forward and was accurate with his passing from all ranges.

MF Mason Mount, 6 — An unnecessary challenge saw Mount booked after dragging Yerry Mina down. Mount came close to levelling the scoring with a powerful volley that struck the post.

FW Kai Havertz, 5 — Havertz was often too focused on getting the better of Mina with needless plays off the ball that sometimes went unnoticed by the referee.

FW Timo Werner, 5 — The 26-year-old looked to make runs in behind Everton’s line but cut an isolated figure for most of the game, with Chelsea unable to produce any worthy pieces of link-up play at the top end of the pitch.

Mateo Kovacic (Jorginho, 46′), 6 — Started the second half slowly but eventually helped set the tone for Chelsea in midfield, transitioning the ball forward and finding his side’s wide players. Forced a low save from Pickford in stoppage time.

Hakim Ziyech (Werner, 68′), 7 — The attacking midfielder threatened with his set piece delivery, but his teammates didn’t seem to be on the same wavelength. Everton struggled to get near him inside the box.

Christian Pulisic (Azpilicueta, 68′), 7 — The United States star — the match winner last week against West Ham — didn’t get on the ball as much as Tuchel would have liked, with Everton getting plenty of numbers behind the ball for the final period of the game. Almost picked up an assist after an excellent ball late on.