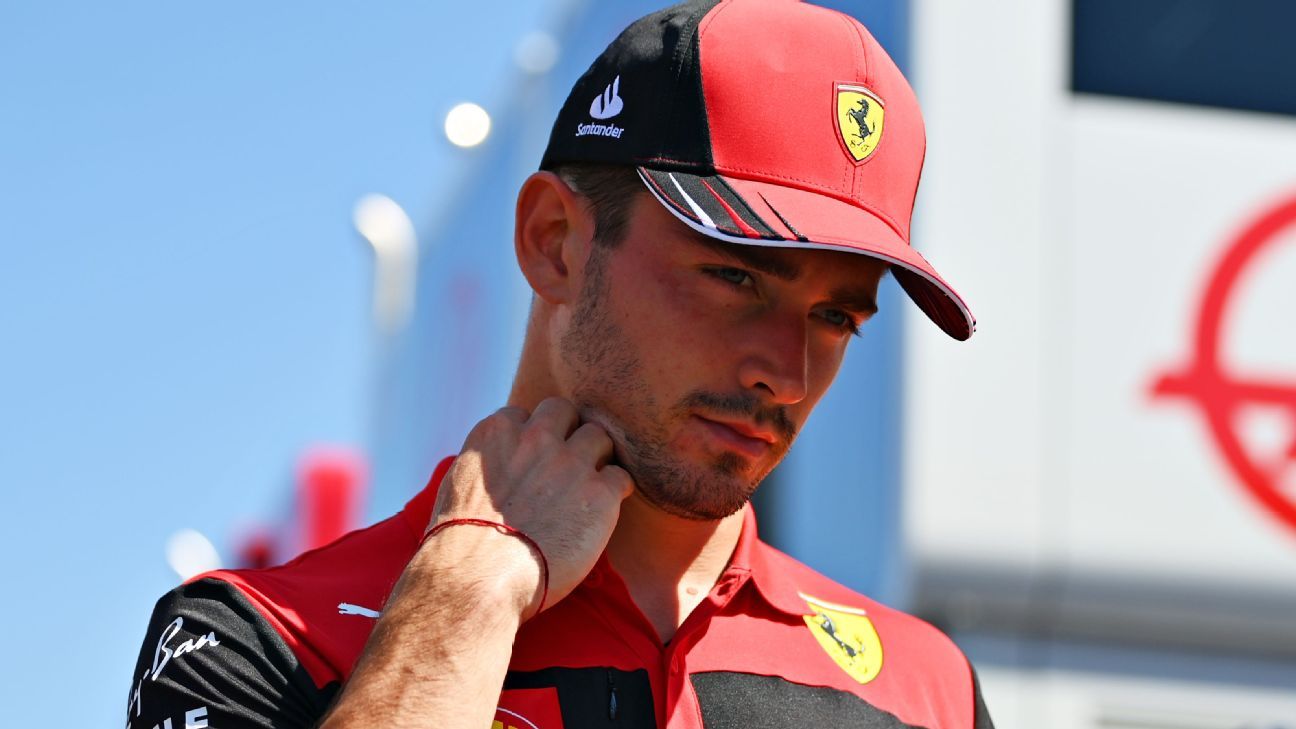 LE CASTELLET, France — The devastation was audible in Charles Leclerc’s voice as he screamed over team radio. His car was nose into the barriers at Turn 11; his championship chances were in pieces.

What made it so difficult to bear was that this moment was on him. On a weekend when his Ferrari looked like a match for Red Bull and was looking on course for victory, he made an unforced error.

“It was just a mistake,” he said. “I tried to take too much around the outside and probably put a wheel somewhere dirty. It’s my fault, and if I keep doing mistakes like this, then I deserve to not win the championship.

“The level is very high this year, I’ve been performing at a high level, but if I keep doing these mistakes, then it’s pointless to be at a high level.”

It’s hard to argue with Leclerc’s assessment. The mistake means Leclerc is now 63 points adrift of Max Verstappen in the championship with 10 races remaining.

Had he not made the mistake and gone on to win the race, he would have cut the gap to the reigning champion to 31 points and successfully deprived Verstappen of a victory for the third consecutive race in a row. The accident felt like a pivotal moment in Leclerc’s title campaign.

Would Leclerc have won without the mistake?

The opening laps of the French Grand Prix were tense as Verstappen’s Red Bull stalked the rear of Leclerc’s Ferrari. Initially it seemed like a matter of time before Verstappen made use of his Red Bull’s superior straight-line speed and steamed past Leclerc with the help of his car’s Drag Reduction System (DRS), but the Ferrari driver was fast in all the right places to hold off the reigning world champion.

The battle was made all the more exciting by the setup decisions of the two teams earlier in the weekend. Ferrari had opted for a high downforce setup, resulting in high cornering speeds but a deficit on the straights, while Red Bull had prioritised straight-line speed over cornering performance with a low-drag setup.

In theory, Verstappen should be able to breeze past the Ferrari on the Mistral Straight, but Leclerc’s speed through Turns 5 and 6 beforehand meant the Red Bull was never quite close enough to get the job done. After several failed attempts, Red Bull looked to take the lead through the pit stops and called Verstappen in for fresh tyres on lap 16 — much earlier than anyone had predicted for a one-stop strategy.

Given the pace of the front-running cars, it appeared as though Verstappen was committing to a two-stop strategy, but the team insists it was only ever considering a one-stop. The plan was for Verstappen to use the pace advantage from his new tyres after the pit stop to make up enough time on Leclerc to then take the lead when Leclerc made his own pit stop several laps later.

Had the plan worked, it would have given Verstappen the lead of the race but come at the cost of a tyre disadvantage, as Leclerc would have emerged from the pits on tyres several laps fresher than the Red Bull’s — an advantage he would have taken to the end of the race and tried to exploit with an on-track pass for victory.

Red Bull team boss Christian Horner acknowledged it was an aggressive strategy but was optimistic Verstappen would have been able to hold on for the win.

“It was interesting because Max was able to stay close to Charles for a long period of time in the first stint without the tyres getting stratospherically hot,” Horner said after the race. “We were — as we’d seen the rest of the weekend — very quick in sector two [on the straights], similar to Ferrari in sector one and bit slower in sector three — mainly Turn 11.

“The race was going OK and we were in his DRS, but we couldn’t get close enough in Turn 6 ahead of the straight to really capitalise on the DRS. So that’s why we banked the track position, and I think we would have been able to defend reasonably comfortably with the speed we had in sector two.

“It was very close between the two teams even though we had a very different approach to achieving the lap time.”

If anything, once Verstappen pitted, Leclerc should have been able to take it easier with the Red Bull off his tail. According to engineers at rival teams, the optimum lap to pit on for a one-stop would have been around lap 22 or 23, so pitting as early as Red Bull did would have run the risk of running out of tyre performance by the end of the race.

For Leclerc, it was about playing the long game and banking a tyre advantage for the end of the race rather than trying to keep Verstappen behind after the pit stops. Which is why it was so surprising when he spun on lap 18.

Once Leclerc had spun out of contention, Verstappen was able to ease off knowing that Lewis Hamilton’s much-slower Mercedes was never really going to be a threat for the victory. As a result, we’ll never know how much his tyres would have suffered by the end of the race had he been put under real pressure by Leclerc.

“Charles got the pole, he was leading the race and I think we had an edge on the Red Bull in terms of tyre degradation by lap 15, because Max had to stop,” Binotto said. “We could have extended the stint and we were extending the stint, looking at the time where Max stopped when he was starting to suffer from tyre degradations, Charles was gaining two- or three-tenths per lap on him, proving once again that our car is great gentle with tyre management.”

Unfortunately, we’ll never get to know who was right.

Is Leclerc too error-prone to be world champion?

What will hurt most for Leclerc is the knowledge that his Ferrari is capable of challenging for the title this year. Championship-worthy cars are hard to come by in F1, and the majority of drivers will go their whole career without ever getting a shot at the title. Such opportunities need to be taken, but Leclerc can feel this one slipping through his fingers after just 12 of 22 races.

After Sunday’s result, even the best possible points swing in Hungary next weekend (with him winning and Verstappen failing to score) would only bring him back to his pre-France long-shot status — only with two fewer races to close the gap. More likely, Ferrari and Leclerc will go into F1’s summer break staring at a gap of over 50 points and wondering where it all went wrong.

If they are honest with themselves, they will uncover a long list of errors that has been steadily growing for the past nine races. Since the Australian Grand Prix in March, which Leclerc won to extend his championship lead to 36 points, he has conceded 107 points to Verstappen — an average of nearly 12 points per race.

A swing of roughly 72 points in Verstappen’s favour can be attributed to a combination of reliability issues, strategy errors and grid penalties for Leclerc at the Spanish, Monaco, Azerbaijan, Canadian and British Grands Prix, but an exact figure of 32 can be traced to Leclerc himself.

The first of Leclerc’s mistakes came at Imola in April when he spun out of a solid third position trying to catch the two Red Bulls ahead and dropped to fifth at the finish, costing him seven points. The second came on Sunday when he threw away a clear shot at victory, costing him a full 25.

“If we lose the championship by 32 points at the end of the season, I will know from where they are coming from,” Leclerc said. “And it’s unacceptable, I just need to get on top of those things.”

While the outcome of a title race in F1 can often be traced to a long list of what-ifs and maybes, it’s rare a driver can throw away so many points in the first half of a season and still be crowned champion by the final race. Especially when the opposition is as good as Verstappen.

Unlike Leclerc, Verstappen has yet to make a clear driver error. He lost podiums to reliability issues in Bahrain and Australia and a likely win to car damage in Great Britain, but he has yet to make an unforced error of his own. Arguably, that is the difference between the two 24-year-olds and also the reason it is so inconceivable that Leclerc will turn his 63-point deficit around from this point onwards.

But Ferrari is standing by its driver. On Sunday, Binotto said mistakes like Leclerc’s go with the territory of pushing for maximum performance. Then again, the team’s track record of throwing away points through its own mistakes this year means he could hardly be critical of Leclerc.

“I think he was driving certainly at the limit, so there are things that may happen when you’re driving to the limit,” he said. “Why it happened, is there anything else, we take our time with him to discuss, and to judge, but at the moment there is no reason certainly to blame him.

As much as Binotto attempted to deflect blame from Leclerc, he couldn’t hide from the fact that the mistake was costly in the wider championship picture. Again, he was keen to put a positive spin on the situation, but the task facing his team over the next 10 races is unmistakably huge.

“What I said to Charles is that things are more complicated, but not impossible, and simply we will enjoy it more in case we can turn it into a victory by the end,” Binotto said. “So we need to stay focused in each single race.

“If I look back on the last races, we had always a great potential. It didn’t turn into the best results in terms of championship points, but right now there is no reason why in the next 10 races that cannot happen.

“So the potential is there. The drivers are fantastic. So I am pretty positive. Luckily enough in seven days times we compete in Hungary again.”