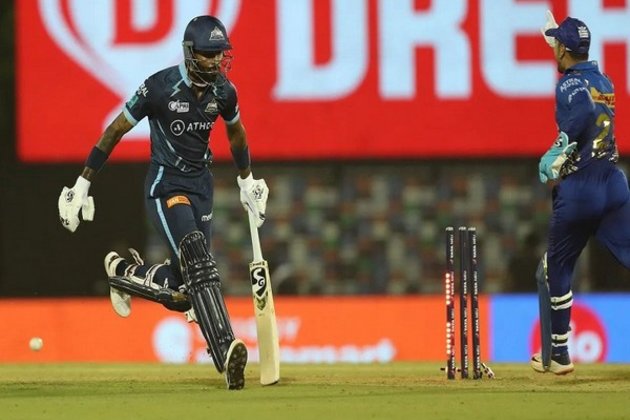 Hardik Pandya said he did not want to offer any excuses but added that GT were let down by their batting and rued the two run-outs.

Hardik Pandya was run out for a 14-ball 24 while Rahul Tewatia got out in the crucial final over.

“On any day, we’d take 9 off the last over. The two run-outs cost us the game. I think batters let us down. In T20s, you can’t lose back to back games,” said Hardik Pandya in a post-match presentation.

“No blame games as we have cleared such games. We have made rookie mistakes which cost us this one. We played good cricket for 19.2 overs in our innings, one or two hits would have made a difference,” he added.

However, Pandya said the bowlers did a ‘fantastic job’ by putting pressure on Mumbai. He further said that there’s no need to stress as the Titans still played well and it was just a matter of two deliveries that ended up deciding the game.

“We kind of played 19.2 or 19.3 overs of good cricket, but losing wickets didn’t help us as I said before. At one point I thought they would post more than 200, but our bowlers did well to restrict them,” he added.

Talking about the match, chasing a target of 178, Wriddhiman Saha (55) and Shubman Gill (52) added 106 for the first wicket but the rest of the batting unit failed to deliver. The star batters of the team David Miller, Rahul Tewatia and Rashid Khan were unable to finish it for the side.

As a result, Gujarat fell short of the target by 5 runs after Daniel Sams bowled a stunning final over at the Brabourne Stadium here on Friday. Consequently, GT suffered their second consecutive defeat in IPL 2022. (ANI)