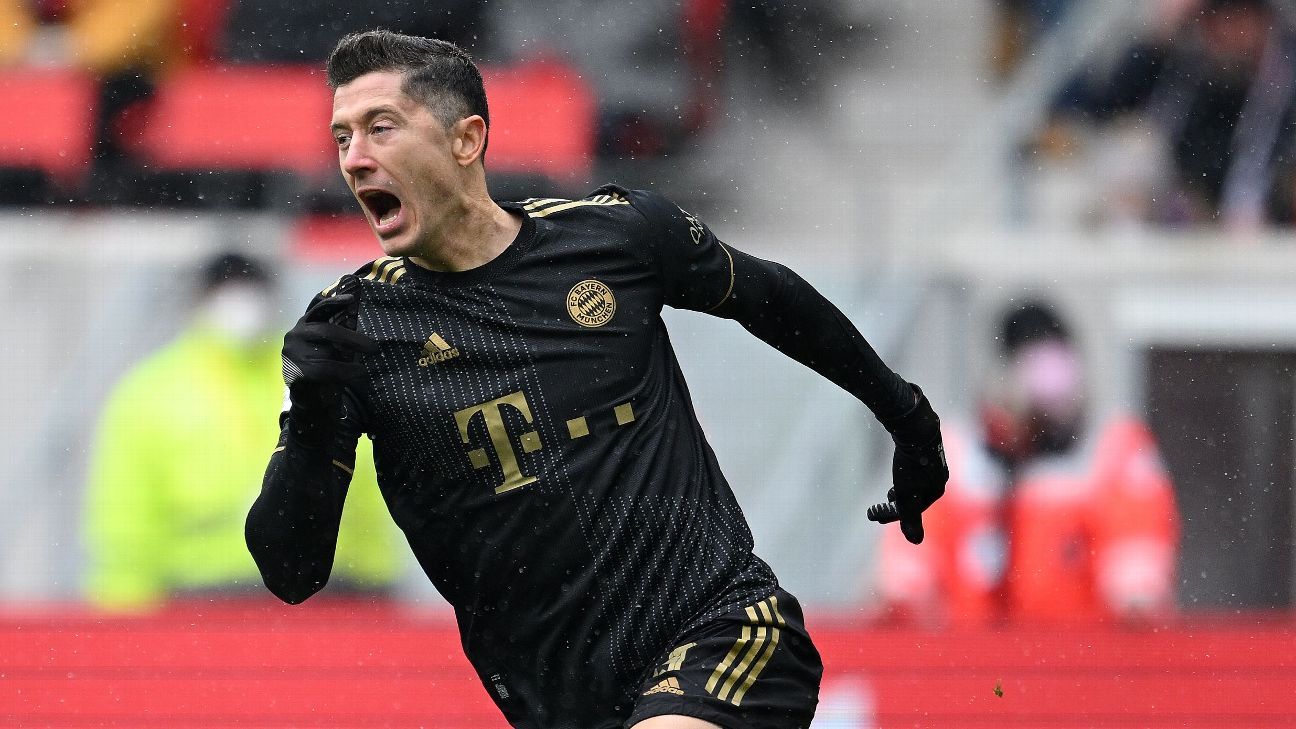 The summer transfer window is approaching and there’s plenty of gossip swirling about who’s moving where. Transfer Talk brings you all the latest buzz on rumours, comings and goings and, of course, done deals!

TOP STORY: Barca to use Dest in deal for Lewandowski?

Barcelona are on the lookout for a high-profile striker in the summer and Sport reports that they are in talks to sign Bayern Munich‘s Robert Lewandowski, with Sergino Dest potentially moving the other way.

Poland international Lewandowski is set to become a free agent in 2023, with no signs that he will pen a new contract in Bavaria after eight years at the club.

The 33-year-old has scored 339 goals in 367 appearances across all competitions for Bayern, becoming one of the most feared strikers in Europe. His tally last year broke Gerd Muller’s 49-year record for most goals in a Bundesliga season and his 31 this season shows he is not slowing down.

Lewandowski’s contractual issues could see Barca boss Xavi Hernandez pounce on the opportunity to land him, though Bayern value the striker at €65 million, something that could be too much for Barca given their financial difficulties.

That’s where Dest comes in, with the report claiming that Bayern are interested in the United States international full-back as an option for the future. The 21-year-old, who has started just 15 league games this season, could be included in a swap deal plus cash that would suit both sides.

Chong, 22, did well at St Andrew’s in the first part of season but underwent surgery on a groin problem that ended up sidelining him for over four months and returned to Old Trafford in November, before returning to the club in February.

United have taken up the year’s option on Chong’s contract but the Netherlands U21 international needs first-team experience and could end up out on loan again next season after previous spells at Werder Bremen and Club Brugge.

09.39 BST: Manchester City are optimistic they can see off competition from Real Madrid to sign striker Erling Haaland this summer, sources have told ESPN.

City are in the market for a striker and are confident they can put together a financial package to cover the €75m release clause in Haaland’s contract with Borussia Dortmund (which comes into effect this year), the Norwegian’s wages and other associated fees including payments to agents.

Sources said that the departures of Angelino, Ferran Torres and Jack Harrison (for combined fees of around €85m) have left City in a strong financial position ahead of the summer window.

They also believe the lure of working with Pep Guardiola and a track record of success which has seen the club win three of the last four Premier League titles can convince Haaland to spend the next stage of his career at the Etihad Stadium.

Ten Hag is also among a handful of names linked to the top job at Manchester United as interim manager Ralf Rangnick’s tenure is set to conclude at the end of the campaign. Sources have told ESPN that Ten Hag has held talks over the role at Old Trafford.

Guardiola joined City in 2016 and has a contract until the end of next season. He said in January he might make a decision on his future this summer.

“Could Erik ten Hag be here at City? Definitely. I think he could be the one,” Guardiola said. “For the way he approaches the game, definitely.”

Guardiola worked with Ten Hag at Bundesliga club Bayern Munich for two seasons when Ten Hag was in charge of the second team.

Steve Nicol singles out Chelsea’s inability to convert chances as their biggest problem against Brentford.

– Real Madrid and Paris Saint-Germain are monitoring a move for Chelsea midfielder N’Golo Kante in the summer, says AS. Kante, 31, has become one of the most successful players of his generation, winning eight trophies since moving to the Premier League, including an unlikely title triumph with Leicester City. However, with his contract expiring in 2023, the France international’s time in England could soon be up, with Los Blancos and the Parisiens eyeing a transfer.

– Real Madrid are eyeing a move for Bayern winger Serge Gnabry, according to Marca. The 26-year-old, who has scored 11 goals and six assists in the Bundesliga this season, is uncertain over his future due to his contract expiring in 2023. This has opened up the possibility of him leaving the club, with Los Blancos eyeing someone to play on the right as Vinicius Junior holds down the left.

– Wolverhampton Wanderers are looking to extend the contract of midfielder Ruben Neves until 2026, reports Ekrem Konur. The 25-year-old has made 28 Premier League appearances this season, becoming a crucial player for the Midlands club, but missed out on the Saturday derby win over Aston Villa where manager Bruno Lage claimed he was a “big loss.” Two other Premier League clubs are said to be interested in a move, with the Portugal international out of contract in 2024.

– Kalidou Koulibaly has been linked with a move away from Napoli for a number of years now, but he could extend his stay with the Azzurri and Nicolo Schira reports that the club have offered him a new deal. The 30-year-old has been at the club since 2014, with his deal expiring in 2023. The current offer runs until 2025, with the club captaincy along with it due to Lorenzo Insigne‘s impending move to Toronto FC in the summer.

– Mohamed Salah has been the centre of contract speculation over the past few months, with his deal at Liverpool expiring in 2023. However, the saga has taken another dramatic twist as the Mirror reports that the Egypt international is set to sign a deal that will see him stay at Anfield for the rest of his career.