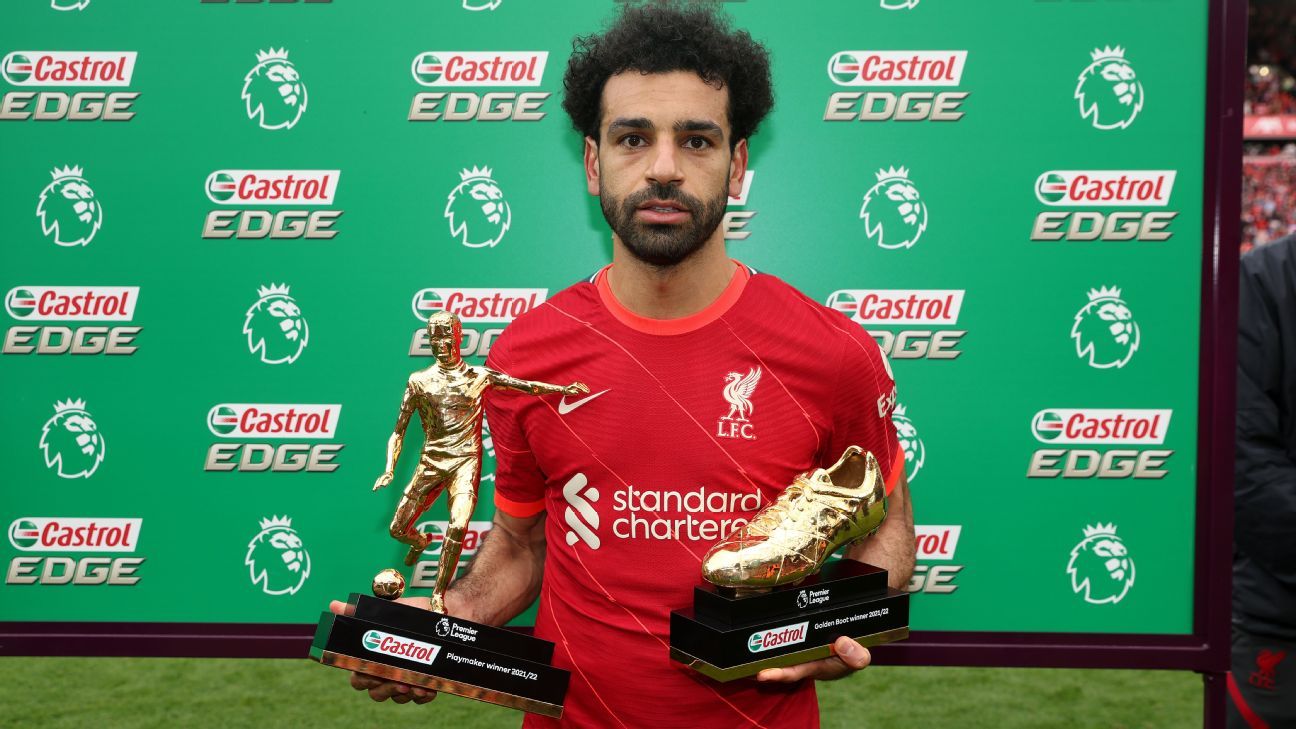 The summer transfer window is approaching, and there’s plenty of gossip swirling about who’s moving where. Transfer Talk brings you all the latest buzz on rumours, comings and goings and, of course, done deals!

Liverpool forward Mohamed Salah has been promised a move to Barcelona if he refuses a contract renewal at Anfield, as has been reported by The Mirror.

The Egypt international has one year left on his contract and has insisted that he will be a part of Jurgen Klopp’s squad for the 2022-23 campaign. However, things become less certain after that point, as he will be able to leave the club as a free agent if a deal isn’t agreed by the summer of 2023.

So far, Salah’s demands for a pay rise have meant that no agreement has been reached during ongoing negotiations with Liverpool. The report claims that Barcelona have verbally promised the 29-year-old a move next season, which is reported to be a major reason behind him stalling in committing to Liverpool.

This comes despite Salah telling close friends months ago that he was willing to sign a new deal with the Merseyside club. With Sadio Mane‘s future also uncertain, Liverpool will be hoping that Klopp signing a contract until 2026 will help to persuade the two talismanic players to stay with him.

However, it is expected that various clubs will come into the equation if Salah’s contract does run down.

10.03 BST: Atletico Madrid could swoop for Pablo Sarabia and Carlos Soler this summer as Diego Simeone looks to strengthen a side that finished 15 points behind champions Real Madrid in LaLiga this season.

Sarabia, 30, is coming off the back of an impressive season on loan at Sporting Club in Portugal, where he scored 21 times in 45 appearances. Now back with Paris Saint-Germain, the French club are said to be willing to let him leave on a permanent basis to avoid losing him for nothing next summer, when his contract expires.

The attacking midfielder has been a regular for Spain under Luis Enrique, scoring seven goals in 20 caps, and is reportedly ready to return to his homeland, per Diario AS.

Soler, 25, is out of contract in 2023 like Sarabia and could be available for anywhere between €15m and €40m, according to different reports. Barcelona have also been linked with the Spain international.

09.37 BST: Manchester City striker Gabriel Jesus has emerged as a possible target for Real Madrid after the Spanish club missed out on Kylian Mbappe, according to various reports.

Marca, confirming a story first aired on Cadena SER, say Jesus has been offered to Madrid as City look to make room for new signings Erling Haaland and Julian Alvarez in attack.

Madrid coach Carlo Ancelotti is reportedly a fan of Jesus, who has a year to run on his contract in England, and Los Blancos are weighing up a transfer that would cost in the region of €50m.

However, Diario AS reveal a potential flaw in Madrid’s plans, with Ancelotti’s squad already containing three non-EU players in Vinicius Jr, Rodrygo Goes and Eder Militao, although they hope Vinicius will obtain a European passport soon.

AS add that could open the door for Chelsea, who, along with Arsenal and Tottenham, are also interested in signing the Brazil international this summer.

Since first revealing his desire to move on from Bayern, Lewandowski has been strongly linked with Barca, whose coach Xavi Hernandez has confirmed the Poland international striker is a target.

However, while Lewandowski stopped short of naming the Catalan club in an interview in his homeland on Tuesday, he suggested he has his heart set on a move to Camp Nou.

“I am not considering any other offers.” he told Onet Sport when asked about the ‘club everyone is talking about.’

In another part of the interview, he also revealed: “I already have a house in Spain and I speak a little Spanish.”

Lewandowski, 33, has said several times since the season ended that he wants to leave Bayern. He reiterated that request again, asking the German club to agree to an amicable exit.

“After various years at Bayern, giving my best, I now want to leave,” he added. “Something has gone out inside of me. I want to leave Bayern to find new emotions in my life. I want new challenges.

“I have had eight beautiful years here, I have met so many wonderful people and I would like it to remain that way. Loyalty and respect are more important than work. The best way [forward] is to find a solution for everyone.”

Sources have told ESPN that Bayern first want to find a replacement for Lewandowski, who only has a year to run on his contract, before negotiating a fee with Barca, who must work out how they will fund a potential deal.

Mbappe, who turned down Real and signed a new three-year deal at PSG last month, topped the list with an estimated transfer value of €205.6 million, beating Vinicius (€185.3m) and Haaland (€152.6m).

– Bayern Munich and Manchester United are both looking to sign Internazionale wing-back Denzel Dumfries, despite the former having already brought in Noussair Mazraoui, according to Calciomercato. Inter are willing to let the Dutchman leave if it means they don’t have to offload Alessandro Bastoni — who has been heavily linked with Tottenham Hotspur. As well as their established interest in Raoul Bellanova, the Nerazzurri see Lazio’s Manuel Lazzari, Juventus’ Juan Cuadrado, and Shakhtar Donetsk’s Dodo as possible replacements if Dumfries departs.

– Sky Sports Deutschland have stated that Bayern Munich are ready to improve their offer for Liverpool forward Sadio Mane‘s services, raising it to between €30m and €35m. The Bavarians are offering the Senegal winger a three-year deal in an attempt to persuade him to leave Anfield, with the main potential stumbling block being the transfer fee.

– Paris Saint-Germain are closely monitoring Lens‘ Seko Fofana as they aim to strengthen their midfield this summer, as reported by Le Parisien. The middle of the pitch is the area they want to focus on the most, as Marco Verratti is the only player in that position who is deemed to have been completely satisfactory.

– PSG are also keen on Stade Rennais‘ Lovro Majer, according to Foot Mercato. There could be competition from the likes of Real Madrid, Atletico Madrid and RB Leipzig, but PSG are still looking to test the waters to see if they could bring the Croatia midfielder in.

– Leeds United winger Raphinha will turn down any approaches from Liverpool as he would prefer a move to Barcelona, as reported by Diario Sport. The Reds would be able to make a stronger financial offering as well as including Takumi Minamino in a deal, which Leeds would like, but Raphinha has his heart set on Barcelona. Barca chief Mateu Alemany will travel to Leeds this week in order to resume talks.