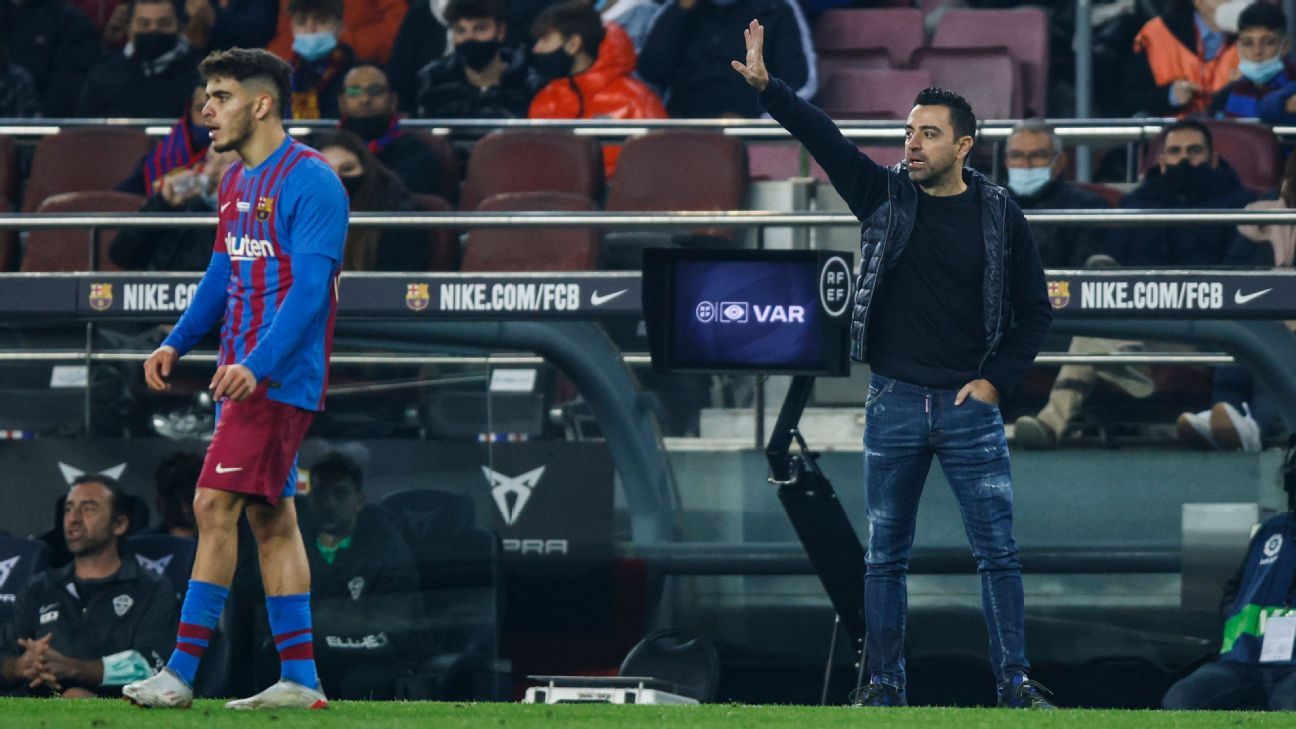 Xavi Hernandez says Barcelona have lost their identity during the six years he’s been away from the club after his side left it late to beat Elche 3-2 on Saturday.

Nico Gonzalez struck the winner in the 85th-minute as Barca recovered from squandering a two-goal lead at Camp Nou to end a run of three games without a win.

Xavi left Barca as a player in 2015 after winning the Treble under Luis Enrique and admits he’s been surprised by what he’s encountered since returning as coach last month.

“We’ve lost [Barcelona’s] model of play and we have to bring it back,” Xavi said in his post-game news conference.

“I have not been here for six years and there are things that have surprised me tactically. I wasn’t here so I don’t know who’s responsible for it, but it’s making [the job] hard for us.

“The large majority [of players] don’t understand positional play. There are mechanisms that I understood from the age of 11 and we have players here that haven’t worked on them.”

The win against Elche moved Barca up to seventh in LaLiga following the disappointment of being knocked into the Europa League last week and the draw against Osasuna.

To turn things around, Xavi has turned to youth, with players still technically registered with the B team scoring all three goals against Elche.

Ferran Jutgla, 22, opened the scoring on his first start for the club with Gavi, 17, scoring the second goal and then creating the winner for Nico, 19.

“You can only take you hat off for that performance from Gavi,” Xavi added. “It’s spectacular how he plays. Along with Nico, Abde [Ezzalzouli], [Ronald] Araujo, [Alejandro] Balde… they’re the future of the club.

“I played here when I was 18 and I was scared. These guys are bursting with personality. I’m delighted with this generation, Gavi is especially exciting.

“What’s most surprising about Gavi is his age, he’s 17. Look at how he’s competing. Today he made the difference with a goal and an assist. I don’t want to compare him with anyone, just make sure he doesn’t put the brakes on because he has no ceiling.”

Xavi said the emerging generation of talent at Barca may prove “even better” than the generation he came through and played with under Pep Guardiola a decade ago.

“We’re talking about seven players at a very good level who can make the difference,” he said. “When I say they are making the difference, it’s not a message for the veterans, but it’s the kids scoring the goals and making them.”

Jutgla and Gavi’s efforts were cancelled out by two goals in two second half minutes from Elche substitutes Tete Morente and Pere Milla to spark memories of Barca’s collapse against Celta Vigo, when they gave up a three-goal lead to draw 3-3.

However, substitute Nico’s second goal in as many games earned Barca the three points and Xavi hopes it will be a turning point ahead of Tuesday’s trip to Sevilla.

“We hope this will be a point of inflection,” the coach said. “We complicated things for ourselves. Elche survived on our errors and that cannot be the case. We have to learn and be more responsible.

“I was a little angry [after they equalised] because I wasn’t imagining not winning the game. We deserved much more, but in the situation we’re in, these are three golden points.”