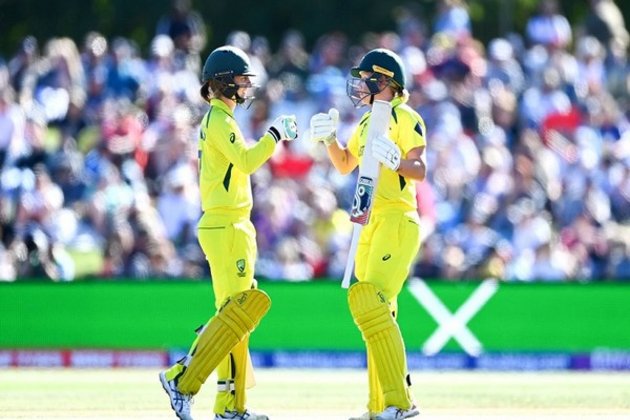 Christchurch [New Zealand], April 3 (ANI): After the seventh World Cup title victory, Australia’s Rachael Haynes praised fellow player Alyssa Healy for ‘incredible innings’ and added that it was nice to contribute and get some runs against England in the summit clash of ICC Women’s World Cup 2022 Hagley Oval, Christchurch on Sunday.

The brilliant display of batting by Alyssa Healy, Rachael Haynes and Beth Mooney gave Australia an upper hand over England in the first innings of the summit clash.

Healy played a brilliant knock of 170 while Haynes and Mooney scored 68 and 62 runs, respectively, to take Australia’s total to 356/5 in the first innings.

Healy not only compiled her own highest ODI score in smashing 170 from just 138 deliveries against England but also registered the biggest score by a man or woman in a World Cup decider.

“It was nice to contribute and get some runs. Start off well. Nature of these tournaments is such that you can get on a roll. Good to make contributions along the way. Important to get the win today,” said Rachael Haynes in a post-match presentation.

Australia opener said it was great fun to see Alyssa Healy’s magnificent 170 and added that it took some pressure off her.

“Yea, it’s a lot of fun (batting with Alyssa). She takes the pressure off me with the way she plays. That was an incredible innings from her, one of the best I’ve ever seen. 2017 didn’t exactly go to plan but it was a great moment for our team to realise the kind of cricket we wanted to play going forward. To do that for a long period of time and to do it in this tournament is really special,” said Haynes. (ANI)