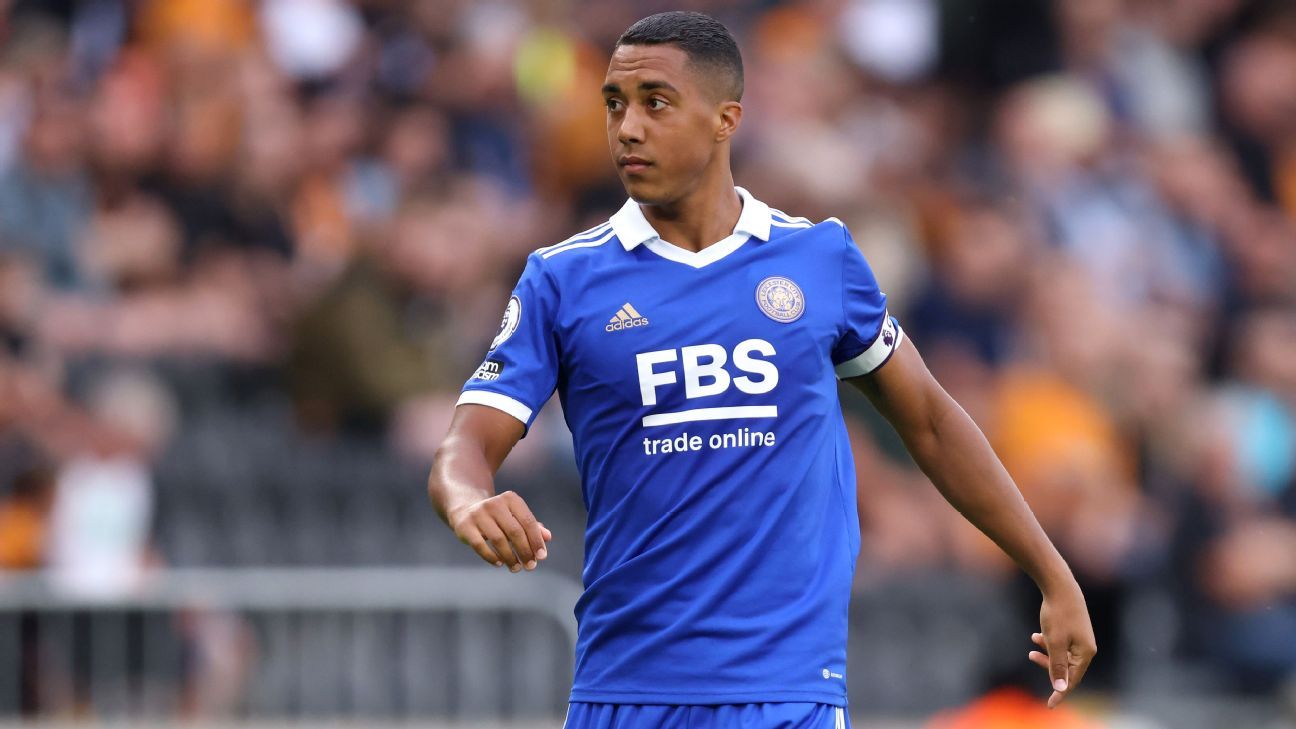 Leicester City are still expecting a £30 million offer from Arsenal for midfielder Youri Tielemans before the transfer window closes, reports The Guardian.

The Foxes are aware of interest from Arsenal, but have not seen an offer arrive yet from Mikel Arteta’s side. Manchester United have also been previously linked with the Belgium international, who is entering the final year of his contract at Leicester.

Tielemans, 25, is expected to be involved when Leicester face Brentford on Sunday in their first match of the new Premier League campaign. Speaking to BBC Radio Leicester on Monday, Leicester manager Brendan Rodgers said: “Like he [Tielemans] always has been, he is the ultimate professional, a great player to work with. He hasn’t committed yet to a new contract here, but it doesn’t take away his commitment every day for the team.”

Other Leicester players linked with potential exits include James Maddison, targeted by Newcastle United, and Wesley Fofana, who remains on Chelsea‘s wishlist.

16.55 BST: Chelsea and RB Leipzig have held talks about Timo Werner returning to the German club on loan, according to BBC Sport.

Werner left Leipzig to join Chelsea in the summer of 2020, but his performances have been sub-par after scoring 10 goals in 56 Premier League matches. Newcastle United are also reportedly interested in signing the 26-year-old Germany international, with Eddie Howe looking to strengthen the Magpies’ attack.

16.30 BST: LA Galaxy have reportedly reached a verbal agreement with Barcelona midfielder Riqui Puig. And they have until Aug. 4 to land the 22-year-old.

Mingueza, 23, struggled to find first-team chances last season but Barca have a clause to re-sign him if they want.

15.26 BST: Manchester City are busy as they have reportedly made an €80m bid to sign RB Leipzig defender Josko Gvardiol, says Bild.

Gvardiol, 20, had been linked with Chelsea and Tottenham but City are keen to bolster their defence, especially at left-back.

The versatile Croatia international is viewed as one of the best young defenders in Europe.

14.45 BST: Manchester City are in talks over the signing of Anderlecht left-back Sergio Gomez, says The Athletic.

Gomez, 21, moved to Belgium from Borussia Dortmund in June 2021 and has impressed.

The youngster, who has been watched plenty of times by City scouts, is another option now the club have opted not to spend £50m on Brighton defender Marc Cucurella, with Chelsea now expected to make a deal

14.06 BST: Arsenal goalkeeper Bernd Leno is set to join Fulham for around £8m.

Leno, 30, lost the No. 1 spot to Aaron Ramsdale last season and wants to move on for more regular game time.

Fabrizio Romano reports that the Germany goalkeeper will undergo a medical and sign a contract until June 2025 with an option for a further season.

13.38 BST: Why sign players from different clubs when you can just get three at once from the same place?

Inter, who are financial trouble, want around €80m for Skriniar and €40m for Dumfries, but Casadei could be more of an issue.

The 19-year-old is a bright prospect for the future and while Chelsea value him at around €8m, Inter want a lot more.

The 35-year-old, who left Hull City at the end of the season, will take on the role previously held by Paul McShane.

Huddlestone will be available as an over-age player for the under-21s, but sources have told ESPN it is predominantly a coaching appointment. It is anticipated that he will play fewer than the five competitive games McShane featured in last season.

Huddlestone is viewed as the perfect role model for United’s young players, having been capped by England and played close to 250 Premier League games for Tottenham and Hull. He has also had spells at Derby and Wolves.

Heaton was behind David de Gea and Dean Henderson in the pecking order last season, but the 36-year-old is now No. 2 after Henderson sealed a loan move to Nottingham Forest.

“I would hope [to play more] but I’ve been in football long enough to know that you never know,” said Heaton. “From my point of view I’ll try to be internally focused and maximise everything I can do and you never know.”

Gab Marcotti and Julien Laurens react to Brighton demanding £50 million for Marc Cucurella and Manchester City being willing to walk away.

The Portugal international, who has enjoyed a successful start to his time at Anfield, joined from Wolverhampton Wanderers on a five-year deal in 2020 for £45m.

The 25-year-old, who scored 15 goals in 35 Premier League appearances last season and helped Liverpool win the Carabao Cup and FA Cup, will sit out their season-opening match against Fulham this weekend with a hamstring injury.

The length of the deal was not disclosed by the club.

Balogun, 20, scored three goals in 18 Championship games at Middlesbrough last season but has returned to the club to see new signing Gabriel Jesus take prime spot up front in the first team.

The England U21 international has scored two goals in 10 games for Arsenal’s senior side but looks set to move to France to continue his development.

10.51 BST: Villarreal have made an offer to Tottenham to sign Giovani Lo Celso, Marca reports.

The Argentina international spent the second half of last season on loan at Villarreal and impressed. The Yellow Submarine want Lo Celso to join them on a season-long loan, then an obligation to sign the midfielder for €15m.

Tottenham signed Lo Celso from Real Betis in January 2020 for €35m and is under contract until 2025.

10.15 BST: Lazio have signed Matias Vecino as a free agent.

The Uruguay international has put pen to paper on a three-year contract with the Rome outfit.

The out-of-favour striker is under contract with Barca until 2024 and previously maintained that he wanted to see out his deal. Recent reports have claimed that Barca could reach an agreement with the Denmark forward to terminate his contract. Celta and Getafe are among the clubs interested in signing the 31-year-old as a free agent.

“He is a good player,” Celta Vigo president Carlos Mourino said of Braithwaite. “He is not our first option but we are not ruling him out.”

The Argentina international is expected to arrive to Vigo this week and complete his transfer. Marchesin, 34, is set to join Celta on a season-long loan with a permanent option included in the deal.

09.26 BST: Napoli and Chelsea are closing on a loan agreement for goalkeeper Kepa Arrizabalaga, according to Sky Italia.

Chelsea have reportedly agreed to let Kepa leave for Napoli on a season-long loan for an undisclosed fee and will pay 75% of his wages.

However, the two clubs have yet to reach a deal on the bonus fee. The Blues are requesting a €3m bonus should Napoli reach the knockout stages of the Champions League and finish in the top four of Serie A this season, while the Italian outfit are only willing to go as high as €1.5m.

Kepa, 27, made only 15 appearances across all competitions for Chelsea last season and is under contract with the Blues until June 2025. At Napoli, the Spaniard would replace last year’s first-choice David Ospina, who has left the club, and provide competition for Alex Meret.

Barca have spent over €150m on Raphinha, Robert Lewandowski and Jules Kounde this summer, while Andreas Christensen and Franck Kessie have both arrived on free transfers.

Following Laporta’s quotes, the club released a statement on Monday which read: “FC Barcelona announces the sale of 24.5% of Barça Studios to the company Socios.com for €100m to accelerate the club’s audiovisual, blockchain, NFT and Web.3 strategy.

“The sale has been made in accordance with the authorisation of the general assembly of FC Barcelona members held last Oct. 23.”

However, due to strict spending caps in LaLiga, the Blaugrana have so far been unable to register the new arrivals with the Spanish league.

Having already sold 25% of their domestic television rights to investment fund Sixth Street for around €600m, Barca hope the deal with Socios.com will further ease their financial problems.

“We’re doing our homework to be able to register players,” Laporta said after announcing the agreement Monday at the presentation of Kounde, a €55m signing from Sevilla.

Details of the deal were not disclosed.

08.00 BST: Christian Eriksen says his move to Manchester United has been years in the making after revealing he almost joined the club on three separate occasions while he was at Tottenham Hotspur.

Eriksen signed a three-year contract at Old Trafford this summer and made his first start for Erik ten Hag’s side in a 1-1 draw with Rayo Vallecano in a preseason friendly on Sunday.

But the Denmark midfielder has said he could have joined the club years earlier and had conversations with United managers Louis van Gaal, Jose Mourinho and Ole Gunnar Solskjaer during his time at Tottenham from 2013-2020.

“I’ve spoken to every manager who’s been here at Man United to see what the situation was,” Eriksen, 30, said. “But I was at Spurs at the time and I really couldn’t see myself playing in another English team at that time. I went abroad and went to Inter.

“It’s been on the books, well, not on the books but it’s been spoken about. For me, it wasn’t the [right] timing, it wasn’t there and I was at a place at Spurs for a long time and I wanted to try something abroad and I went to Inter and ended up having a lovely time.

“But then obviously something happened in the summer and that changed a bit the career path I had in mind, and then obviously to come back to Brentford first of all and then to be here is something I didn’t think could happen a year ago.”

– Newcastle have made an improved offer for Leicester playmaker James Maddison, according to the Telegraph. After their initial £35m offer was rebuffed, Newcastle have reportedly returned with an improved £45m bid. The Magpies are said to believe that the 25-year-old wants to make the switch to St. James’s Park this summer.

– Galatasaray have made an offer to sign Arsenal midfielder Lucas Torreira on a permanent deal, reports Fabrizio Romano. The 26-year-old spent the previous campaign on loan at Serie A side Fiorentina, but a switch there failed to go through. Galatasaray are currently waiting on an agreement with both the Gunners and the player on personal terms before they can complete the move.

– AS Roma are set to announce the signing of Georginio Wijnaldum, claims Calciomercato. The report states that Jose Mourinho’s side have finally reached an agreement with Paris Saint-Germain over a transfer deal. The confirmation is set to be completed on Tuesday or Wednesday, which will see the 31-year-old Netherlands midfielder leave after he moved to the French capital on a free transfer from Liverpool.

– Alex Telles could be free to leave Manchester United in the next month, according to Fabrizio Romano. The 29-year-old made just 26 appearances across all competitions last season, with new boss Erik ten Hag looking to transform his squad in the transfer window. A number of clubs are said to be interested in a move, with Sevilla one of those linked with the left-back.

– Tottenham Hotspur are planning new talks with Roma over a deal for attacking midfielder Nicolo Zaniolo, reports Footmercato. The 23-year-old has just three-years left on his deal with the Serie A side, having made 40 appearances for them over all competitions last season. The Italy international has previously been linked with a switch to north London, but it appears further talks are expected.