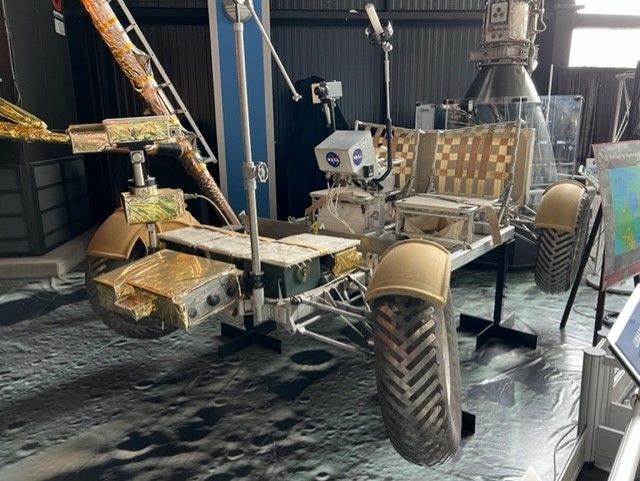 HUNTSVILLE, Ala. (WHNT) – Teledyne Brown Engineering was the company chosen over 50 years ago to design a vehicle capable of driving on the moon for the Apollo space program. The company is trying to once again build a rover for mankind’s return to the moon with the Artemis space program.

With several decades separating the two vehicles News 19 spoke with Craig Sumner, a rover test driver, who helped with the Apollo Lunar Roving Vehicle (LRV), and with Reggie Spivey who heads the team working on the proposal for the new Artemis Lunar Terrain Vehicle (LTV).


Lunar Eclipse Sunday Night: What is it and how to watch

Sumner started working with NASA as a University of West Florida student in the early 1970s. He would travel up to the Marshall Space Flight Center to work with a simulated rover on top of a hydraulic facility.

Sumner explained how he brought a human element to the testing of the first lunar rover, “We found out from me driving it for several hours at a time that I would actually draw blood to my wrist from the action of pivoting my wrist forward to go forward and going back. That constant movement caused the ring in my glove to rub on my wrist.”

He also told News 19 about how back in the day, during Apollo 15, he supported the mission by following along with the astronauts while they were on the moon.

“I was actually participating with the astronauts who were 240,000 miles away from me on Apollo 15 with Jim Irwin and Dave Scott, deploying the rover about 15 minutes behind the astronauts,” Sumner remembered. “It was just fun watching these guys actually take something that we helped build and it worked beyond expectations.”


First-ever image of a supermassive black hole: Sagitarrius A*

Reggie Spivey is the vice president for space systems at Teledyne Brown Engineering, he oversees a team of 300-plus people covering a variety of space projects. Most recently his team designed and built the Launch Vehicle Stage Adapter on the SLS.

Spivey said if they are chosen as the prime contractor for this rover project it would mean a lot to him and his team.

“It’s one of those things you dream about doing,” he told News 19. “I remember when Neil Armstrong put those first footprints on the moon… It’s exciting to be able to go back and to be there to stay. It’s an exciting opportunity for us and the whole team.”

The Teledyne team started the process a little over two years ago. Spivey told News 19 that it takes a long time from the first idea to putting a team together and getting to a design concept.

The new Artemis rover is in the very beginning stages of its development. Spivey explained they did not have the full requirements from the government just yet but he expects a draft to be handed out over the summer.

Even without the full requirements, the team still has ideas of what the LTV design needs to have in order to function on the moon.

A rover was only used on Apollo 15, 16 and 17. A new rover was sent to the moon on each mission and only ran for about 12 hours and 40% of the 36-volt battery’s capacity. All three rovers are still on the moon and the trails they left can still be seen by telescopes and satellites.

The Artemis rover will be expected to last much longer than one mission.

“We also have to be able to operate reliably for 10 years so instead of just one 12-hour mission we have a long life,” Spivey explained. “A large part of the mission will be done operating this rover remotely and also doing autonomous vehicle operations as well.”

Some things will be similar between the two, including the optimal speed at which the rover can travel, 11 miles per hour.

“While it will probably be able to go faster than that, we learned back in the day that 11mph is really the safest speed to travel up there,” Spivey told News 19.


Space discoveries that will blow your mind

Sumner told News 19 that one of the biggest challenges with the Apollo rover will be the same with the Artemis rover, weight.

“I think when you’re doing something for the first time, weight was one of the biggest challenges that we had. That’s one reason why the tires are so unique, I mean they are made out of piano wire. So, the weight will be another issue for them to work on this time,” Sumner explained.

Spivey spoke about temperatures and a lack of sunlight being other challenges the team will have to overcome.

“We’ll be on the south pole of the moon. On the south pole of the moon, we’re going to endure a lunar night that can be as much as 125 hours. So we got to be able to generate power and be able to operate for those long periods of time. We’ll have to endure temperatures that can be down to as low as 280 degrees Fahrenheit or as high as 260 degrees Fahrenheit, whereas the original lunar rover didn’t have to do that,” he said.

Spivey added that while they will be working with Sierra Space, Nissan, Textron and other subcontractors in different parts of the county the bulk of the work will be done in Huntsville.

“Teledyne is the prime so we’ll be coordinating the work of all of the subcontractors. So there’ll be pieces of it done in other parts of the country but the bulk of the work will be done and especially the final integration will be done here,” he said.

Spivey told News 19 that no one from the original rover team is with Teledyne anymore but they do have subject matter experts, who were a part of the Apollo program, to discuss ideas with.

“It’s going to be really cool on Artemis to see what design they come up with and what capability they have,” Sumner said when asked about the new project.

Spivey said the goal is to have the Artemis LTV ready and on its way to the moon on the Artemis V mission slated for some time in 2028, which means the rover will be operational through 2038.