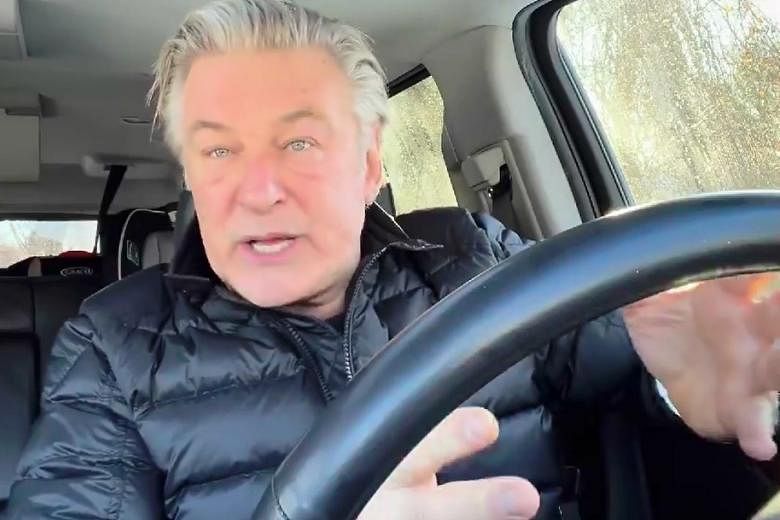 LOS ANGELES (NYTIMES) – Following reports that actor Alec Baldwin’s cellphone had not yet been turned over to officials investigating the fatal shooting on the Rust film set – weeks after a search warrant was granted – Baldwin said on Saturday (Jan 8) that any suggestion that he was not complying with law enforcement was a “lie.”

Police in Santa Fe, New Mexico, obtained a search warrant more than three weeks ago granting them access to information on Baldwin’s phone related to the October shooting, during which a gun that Baldwin was rehearsing with fired a live round, killing the movie’s cinematographer, Halyna Hutchins, and wounding its director, Joel Souza.

The sheriff’s office and district attorney of Santa Fe County investigating how a live round got into the gun told media outlets this week that authorities did not yet have Baldwin’s phone, prompting the actor to respond in a video posted to his Instagram page.

Filming himself from the driver’s seat of a parked car, Baldwin said the process for recovering information from his phone “takes time” and involved authorities in New Mexico coordinating with authorities where he lives.

“Someone from another state can’t come to you and say, ‘Give me your phone’,” Baldwin said in the video, adding: “They have to specify what exactly they want. They can’t just go through your phone and take, you know, your photos or your love letters to your wife or what have you.”

He added, in reference to the process and the warrant, “We are 1,000 per cent going to comply with all that.”

According to an affidavit filed in the application for the search warrant, granted by a judge in New Mexico on Dec 16, Detective Alexandria Hancock asked Baldwin and his lawyer on the day of the fatal shooting to hand over his phone but was told to obtain a warrant.

That month, a lawyer for Baldwin, Aaron Dyer, said they “proactively requested that the authorities obtain a warrant so that we could take steps to protect Mr Baldwin’s family and personal information that is clearly unrelated to the investigation.”

When the search warrant for Baldwin’s phone was granted, officials in Santa Fe requested help from the sheriff’s office in Suffolk County in New York, where Baldwin has a home.

Juan Rios, a spokesman for the Santa Fe County Sheriff’s Office, said on Friday that once authorities received the results of the search warrant, they would be considered public record.