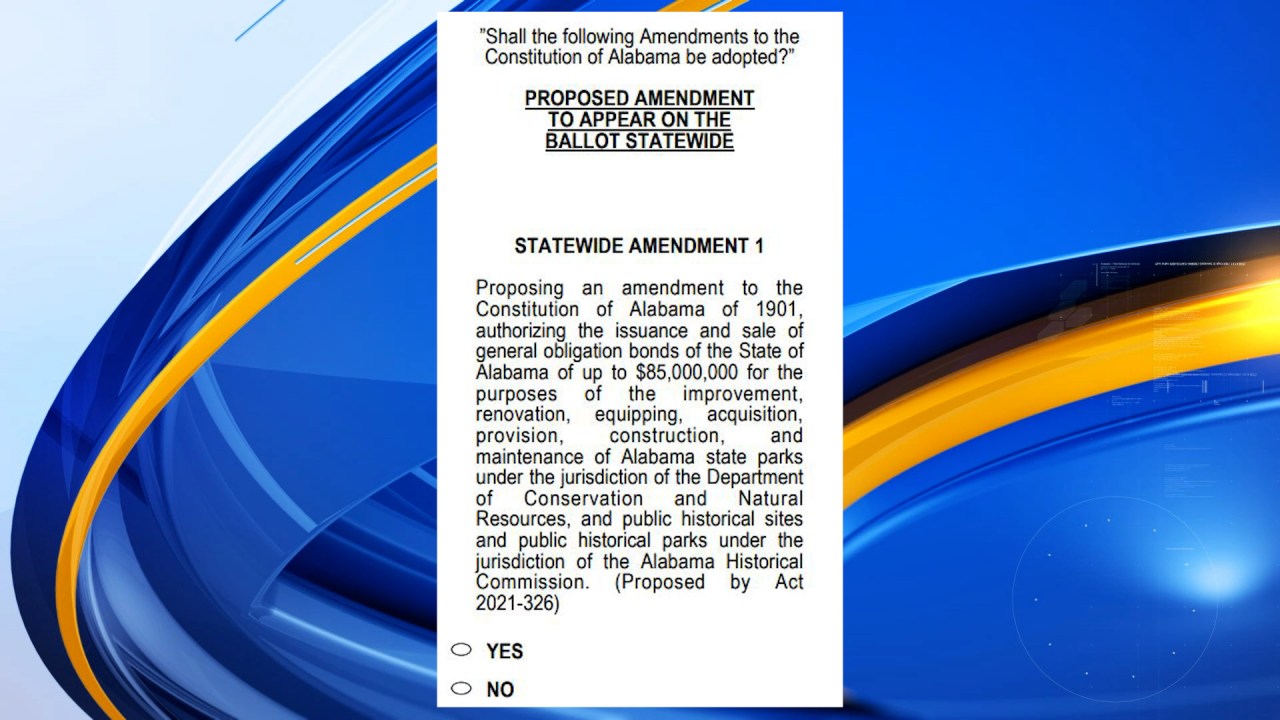 HUNTSVILLE, Ala. (WHNT) — When voters hit the polls on May 24, they’ll find one statewide amendment on the ballot. The state parks amendment, as it is referred to, would amend the state constitution and create an $85 million dollar bond.

That funding would go towards the improvement and maintenance of state parks.

According to text included in a sample ballot from the Alabama Secretary of State, the measure is a result of the passing of House Bill 565 during the 2021 Alabama Legislative Session.

The proposed amendment included on the sample ballot reads as follows:

Proposing an amendment to the Constitution of Alabama of 1901, authorizing the issuance and sale of general obligation bonds of the State of Alabama of up to $85,000,000 for the purposes of the improvement, renovation, equipping, acquisition, provision, construction, and maintenance of Alabama state parks under the jurisdiction of the Department of Conservation and Natural Resources, and public historical sites and public historical parks under the jurisdiction of the Alabama Historical Commission (Proposed by Act
2021-326).

The amendment is sponsored by State Representatives Nathaniel Ledbetter and Wes Kitchens.


Parts of Capshaw Road to close for roadwork next week

News 19 reached out to both to learn more about the amendment. At this time, we’ve only heard back from Rep. Wes Kitchens.

“I have three state parks in my district, so I see first hand some of the needs we have,” Kitchens told News 19. “Anything that we can do to get people outside, outdoors, is just going to be great for our state.”

Rep. Kitchens said through funding from the bond, projects can be done to “give our citizens really some of the convivences they expect when they go to our state parks.”

Any of the 21 state parks in Alabama would be eligible for the funding. Kitchens said it would be done on a “needs-based assessment.” The funding would be used for infrastructure improvements, facilities and anything “along those lines that our state parks need directly,” Kitchens said.


How to get into Panoply 2022 for free: volunteer!

Amendments and ballot measures are typically seen during general elections, and not during the primaries. However, Kitchens said the he thinks the amendment would stand out better on a less crowded ballot.

He said it can “help keep this focused, so people know what they are voting on”.

Commissioner of the Department of Conservation & Natural Resources Chris Blankenship agreed with that sentiment.

“It was very important for us to get this started, and it was important for me to have this on the primary ballot where it would really be front and center so that people can see that and vote for it,” Blankenship stated.

Blankenship said Alabama’s parks need to be able to keep up with what today’s park visitors are looking for.

He said, “you know, a lot of our camp grounds were built when camping was a pop-up camper and a tent.”

“Now, that we have these half a million dollar motor homes that have three air conditioners and need the 50 amp service, you know it’s important for us to upgrade our camp grounds to be able to provide for the people to be able to bring those types of equipment to our parks” he continued.

The amendment will be on both the Democrat and Republican primary ballots.

In the sample ballot given by the Secretary of State’s office, it offers further explanation on what the $85,000,000 would be used for.