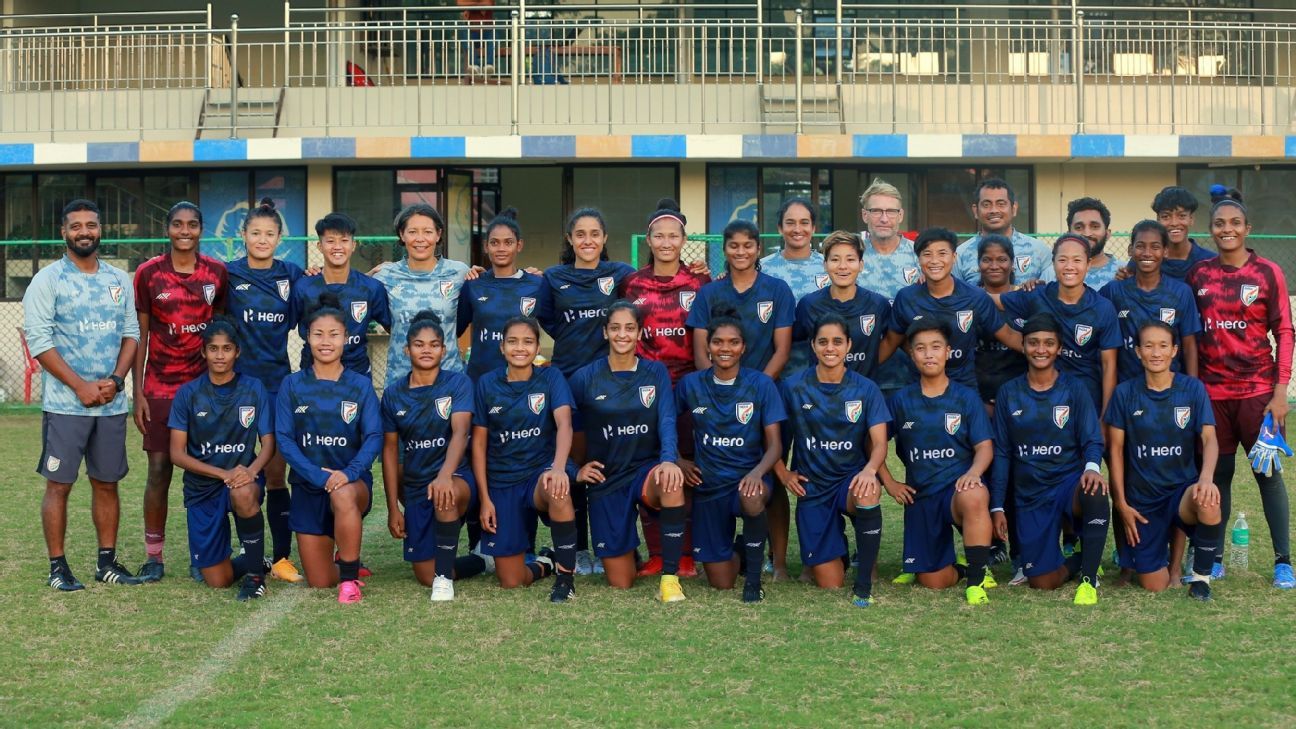 The hosts, under Swedish coach Thomas Dennerby, have named a young 23-member squad for the event, with 15 players under the age of 25. Star player Bala Devi misses out due to an ACL injury, but it’s a well-balanced squad and harbour strong hopes of making the knockouts.

The first-choice goalkeeper. A veteran and a leader in the squad, she became the first Indian woman to play competitive football in England when she signed for West Ham United in 2015. Last year, she signed for Icelandic club Hamar Hveragerdi but the pandemic derailed those plans. She was in goal during Gokulam Kerala’s IWL win in 2020 and their AFC Women’s Club Championship campaign in 2021.

Relatively new to the Indian team, put up a solid show during the AFC Women’s 2020 Olympic Qualifiers. Has played for Gokulam and KRYPHSA FC.

The third-choice keeper. Was part of Sethu FC’s victorious IWL side in 2019.

Chibber, she of curling long-range goals and viral free-kicks (remember the screamer against Nepal at the 2019 SAFF Championship?) is the team’s starting right back, but is comfortable further forward as well. She’s the team’s set-piece specialist and had won the MVP in India’s SAFF Women’s Championship (SWC) triumph in 2019.

Currently with champions Gokulam, has also played with the Manitoba Bisons in Canada (where she did her PG in sports psychology).

The tough-tackling Sweety made her debut in 2017, and hasn’t looked back since. Her partnership with Ashalata Devi in the heart of defense is one of India’s strengths. Won the IWL with Sethu in 2019, and currently plays for KRYPHSA.

One of a number of versatile players in the squad, Ritu is a full back who can also slot in into midfield when the need arises. Was initially selected for the senior NT camp in 2017 but a long-term knee injury kept her out for a while. Made her comeback to the NT side in 2019 and has been a regular member since then. Plays her club football for Gokulam.

Captain of the team and its most experienced member. Starting off as a midfielder, she is now the country’s finest ball-playing central defender.

Her composure and leadership have been vital for the squad in recent times, when India made the second round of the Tokyo Olympic qualifiers and won the SWC. Also won the IWL with Sethu FC that year. Her performances saw her nominated for the AFC Player of the Year in 2019.

A defender who’s comfortable at centre back and fullback. Has been in and out of the team since 2015, but of late has been a fixture in the squad. Her aerial prowess has an impact on both ends of the field.

Has played for Rising Students Club and was a member of Gokulam’s IWL winning side.

A prodigious talent who has captained India at the U-17 and the U-19 levels. Plays for the Young Welfare Club in her home state. A midfielder by trade, she is in the squad as a cover for various positions.

In the absence of the injured Bala Devi, Kamala is easily the top scorer in the squad. Equally adept at creating and scoring goals, she plays as an attacking midfielder or a support striker.

Spent more than two years outside the NT set up after a falling out with the coaching staff, but was recalled by Dennerby. Consistently among the top scorers and top assist-makers in the national championships and the IWL, she stars currently for Gokulam.

A versatile midfielder who’s comfortable across multiple positions, Anju broke into the squad in 2016. Holds the record for the fastest goal in IWL history when she scored after just 14 seconds for Gokulam against Central SSB Women in 2019.

Was given her international debut by Dennerby against Venezuela in December 2021, though she has been a part of the camp set up since 2019. The versatile midfielder plays for Sethu.

An attacking midfielder by trade, Ratanbala is comfortable across any position in the attacking third. Speedy and skilful, she’s one of the most prolific members of the squad.

Called up to the NT in 2017 for the Asian Cup qualifiers, she was the AIFF emerging women’s footballer of the Year in 2019-20. Plays her club football for KRYPHSA.

Impressive performances at the junior level have seen Priyangka get a first senior call up for the senior NT. The attacking midfielder was India’s top scorer at the 2021 U-19 SWC (four goals). Previously, she had been named MVP of the 2018 U-15 SWC.

The team’s midfield general; a deep-lying playmaker who dictates the pace of India’s play and is their chief creative force.

Was the joint-top scorer in the 2019 SWC and has won the IWL with Sethu. A pathbreaker for Tamil Nadu women’s football, she was the top scorer in her state’s first national championship win in 2018.

However, she couldn’t play for the country or in the IWL for more than a year after that, reportedly due Tamil Nadu Police, her employers, denying her permission. She made her return to the team in 2021. In 2020, as a police officer, she was notably on the frontlines during the nationwide lockdown.

Hit the headlines when she scored that goal against Brazil late in 2021; it was after all the first by an Indian woman against a top-10 side. The most exciting talent in the squad, and had earlier last year become the first-ever Indian player to score in a top-flight Asian competition when she scored in the AFC Women’s Asian Championship against Uzbekistan’s FC Bunyodkar.

Direct and fast, Manisha uses her pace to good effect down either wing. Named the AIFF Women’s Emerging Footballer of the Year in 2020-21, she was also a key part in Gokulam’s 2020 IWL triumph.

First broke into the senior NT team in 2013, but was named the AIFF Emerging Woman Footballer of the Year in 2019 — the year she won the IWL with Sethu FC. The defender-turned-winger was also prolific in the 2020 Olympic Qualifiers.

Going into the tournament, she is one of the in-form forwards in the team, notably having scored a remarkable header against Venezuela this December.

Named the AIFF Emerging Woman Footballer of the Year back in 2015. Has won the IWL with Rising Students. Having started as a midfielder, she has since adapted to become the team’s frontline striker. She, too, is in good form having scored a brace in a 5-0 win over Bahrain in October last year.

Made her debut in 2021, during a friendly against Belarus in April. This came after a good show in the junior level – when she memorably scored five goals against Pakistan in the 2019 AFC U-19 Championship qualifiers after coming off the bench.

More recently, she scored the winning goal India’s 1-0 win over Chinese Taipei – a higher-ranked side that is in the same group at the Asian Cup – in a friendly in October.

Another youngster who has made it to the NT straight after impressive age-group performances. A dynamic winger, her big moment was when she scored three goals in India’s successful 2019 U-15 SWC campaign. She first made the senior team in early 2021 and debuted in October against Tunisia in a friendly.

Has been among the goals regularly for India as well as in domestic competition. Made her debut in 2018 and has had consistent scoring returns across tournaments. Was a key part of Sethu’s 2019 IWL triumph, and was the highest scorer in the following year’s edition. Was also the top-scorer in the recently-concluded 2021 senior Nationals.

Has been selected in the senior team after prolific outings in junior tournaments. Was picked in the 2019 AFC U-19 Women’s Championship qualifiers squad when she was only 15, and made her senior team debut three years later during the South American tour late last year.

NOTE: The stats for NT Caps and Goals are from the official AFC document. The positions for players are based on how they are named in the squad.