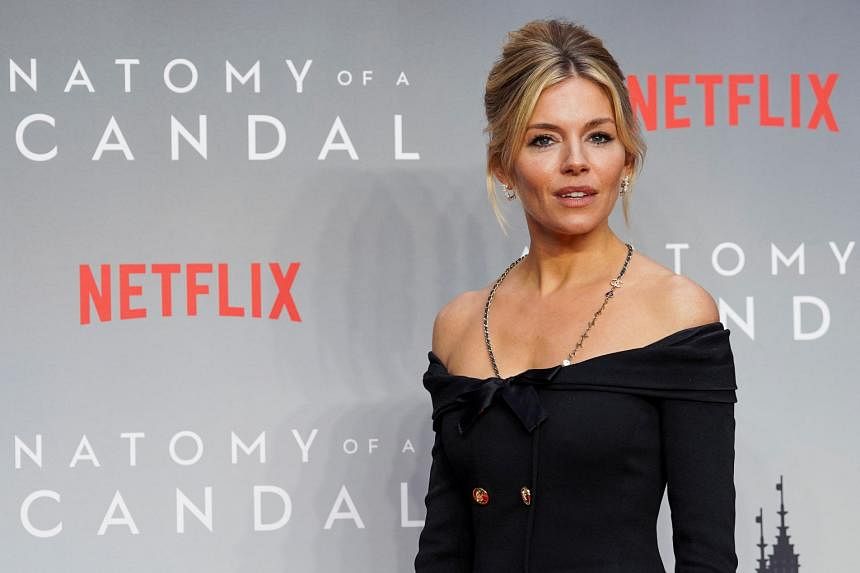 NEW YORK (NYTIMES) – Two years ago, when Sienna Miller received the scripts for Anatomy Of A Scandal, a high-gloss limited series from David E. Kelley and Melissa James Gibson, she read them straight through.

“I binged them in the way that you would want to binge a six-part drama,” she said.

She had been offered the role of Sophie, the silken wife of James (Rupert Friend), a parliamentary minister. Sophie would require the complete range of Miller’s skills and gifts – charisma, vulnerability, beauty, wit.

And in a career in which she has mostly been relegated to supporting wife and girlfriend slots, Sophie is solidly the lead. And yet, Miller hesitated. “I had reservations because it felt sort of ugly and familiar,” she said.

In the first episode, Sophie learns that James has had an affair with a co-worker; The Daily Mail will splash the story in the morning. For Miller, who had weathered a mid-2000s scandal, in which her then-fiance Jude Law slept with his children’s nanny, the resonances were obvious.

“In the weird, twisted way that somehow exists, I was drawn to that, to exploring that from a different perspective,” she said.

Of course, Miller isn’t Sophie. And yet there are moments in Anatomy Of A Scandal when Sophie’s life seems inextricable from the actor playing her.

Take, for example, a scene in a late episode, in which Sophie confronts a not-quite antagonist. “I have been simultaneously under and overestimated my entire life,” she says. “If I have traded on the currency that the world told me was mine, well, that’s what I was trained to do.” It’s hard to know just who is speaking.

These parallels weren’t lost on Sarah Vaughan, who created the character of Sophie in her 2018 novel and is an executive producer of the series. They lend “an extra level of nuance and meaning to her performance,” Vaughan said.

In shooting the series, Miller also consciously drew on her past. “There is a kind of muscle memory about many of her experiences that I have. So it was quite available,” she said. Sometimes, it was almost too available.

Friend, speaking by telephone, said that Miller can give herself over to a character so completely that she seems practically possessed.

“Sienna herself will be physically altered, will be either sweating or shaking, or her heartbeat will have increased, or a twitch will have occurred that she could never have planned,” he said.

When it came time to shoot the scene in which Sophie learns of her husband’s affair, Miller’s heart began to beat so fast and so loud that it registered on her microphone.

“The feeling that something’s about to come out that you have absolutely no control over, the anxiety of knowing that you’ve got one sleep before something intensely personal is made extremely public, that’s an agonising state of affairs,” she said.