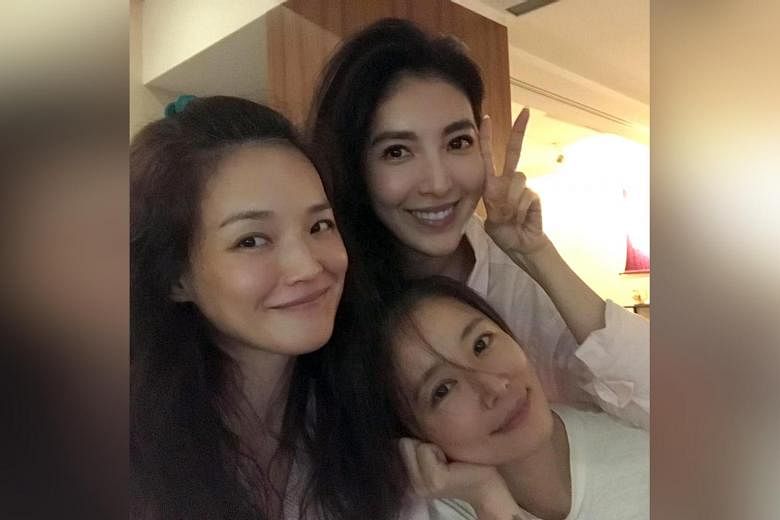 SHANGHAI – Stuck in quarantine, Taiwanese actress Shu Qi has lost no time in trying to find out who the murderer is in the Netflix drama Light The Night, starring her good friends Cheryl Yang and Ruby Lin.

But though Yang has turned out to be her surprise neighbour in quarantine, no answers are forthcoming.

Comprising three seasons, the hit series chronicles the lives of hostesses of a Japanese nightclub in Taipei in the 1980s.

A key character is murdered in the first season and the killer’s identity is expected to be revealed in the third season, which will air on March 18.

Shu Qi flew to China for work recently and is currently serving her quarantine at a hotel in Shanghai.

The 45-year-old actress, whose real name is Lin Li-hui, was pleasantly surprised to find Yang, 44, also serving quarantine in the hotel opposite hers.

In a Facebook post on Wednesday (Feb 23), Shu Qi wrote in Chinese: “What a coincidence. We did not discuss this beforehand and I have also forgotten she was also here.”

She posted a photo of Yang waving at her and continued: “So this is fate…It’s nice to have a friend right across, even though it’s so near yet so far.”

She then took the chance to ask Yang who the murderer was.

Yang replied under Shu Qi’s post: “This is really fate. Rest assured, I won’t tell you who the murderer is.”

She also posted on Facebook a photo of Shu Qi at the balcony of her hotel room, writing: “We didn’t make any prior arrangements to be at the same place at the same time. I was a little nervous before departure, but I jumped and shouted like a child after seeing my friend on the opposite side.”

Her parting shot? “I still won’t tell you who the murderer is even thought you are near me.”