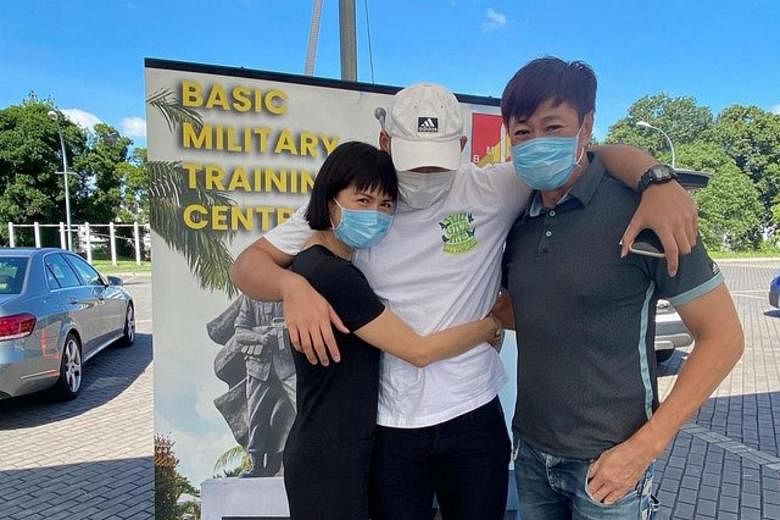 SINGAPORE -Swimmer Joseph Schooling was not the only one who went “botak” (bald) before enlisting for national service recently.

On Thursday (Jan 6), local actress Pan Lingling also posted on social media two videos and a photo of her younger son Kynaston getting his hair shaved by her husband Huang Shinan.

The former actor appeared quite adept at his task, even asking his son, who seemed quite emotional, which side of his head he wanted shaved first.

To respect his privacy, Kynaston’s face was seen only partially in the videos. The couple also have an elder son, Beckham, who was enlisted in 2019.

Pan, 51, wrote: “Today, my little giant joined the army! Due to the epidemic, we couldn’t go to Tekong Island to send him off for his enlistment.”

The actress thought she could take her son only to the door of the camp and had to drive away immediately.

“However, the military department arranged for us to take a picture with our son at another entrance before we said goodbye. One last tight hug with a lot of sentimental feelings! My youngest son has grown up!”

Pan, who recently acted in the Channel 8 drama The Peculiar Pawnbroker, thought she would be quite composed about her son joining the army.

“But now, I want to share it with everyone, I suddenly miss him so much,” she wrote, using an emoji of a face with tears.

Pan also shared two photos of her and Huang with Kynaston who was wearing a cap and a face mask.