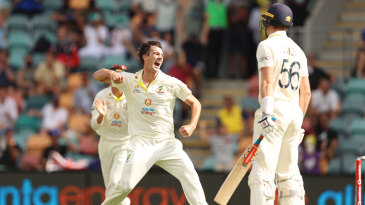 Pat Cummins “It’s pretty crazy. Even as a professional cricketer these are the series you have in your diary a couple of years out. To be at the end of a five-Test series with so many positives – winning 4-0 – it’s huge so really pumped. I’m really happy as a captain, not sure Nathan Lyon agrees with me…think that’s been a highlight, not only the 11 guys playing but we’ve had about 15 players used and some really tough calls to leave out high quality players. Really feels like we are building to something big. To have someone like Cameron Green in his second year to grow as a batter and bowler as well as some of the younger players then the hold stalwarts like Scotty Boland and all the old-pros continue their form. Can’t wait to show our wares overseas, we really judge ourselves in all conditions.”

Joe Root “It’s been a really tough tour. We’ve played good cricket in parts, just not been able to structure a whole game together. It’s something we have to learn from and not go away and keep making the same mistakes. It’s pretty obvious we need to be putting more runs on the board. Too often we’ve not given our bowlers enough to work. We’ve been outplayed in all areas and credit to Australia.”

Sampath Bandarupalli has a couple of stats for you:

8th Test defeat for Joe Root in Australia as captain. Equals Brian Lara’s 8 defeats in South Africa – the record for most defeats as a visiting skipper in a country.

Mark: “As an England fan, this is the right result for the long term, makes it much harder for the ECB to hide from reality (though they will probably try). 3-1 would have been underserved and so harsh on Australia.”

9.57pm: Australia win by 146 runs, and win the series 4-0. This has been abject from England, though who expected anything different on the evidence of what we’d seen earlier in the tour? They fought well for the first two sessions, Wood taking his first-ever six-for in Tests and the opening pair adding 68. But Australia have been rampant under lights: Green, Cummins and Boland took three wickets each, with Starc getting Stokes for good measure. Beaming smiles and celebrations from Australia as we wait for the presentation.

Ricky Ponting on Channel 7: “On performance there’s absolutely no way that Justin Langer cannot continue on as head coach of this Australian cricket team.”

Sandon: “I think we all expected an England collapse, yet they still managed to outdo themselves. Can’t say I’m too disappointed as an Aussie but I was prepared for a pretty exciting fourth day at tea.”

Imran S: “Had the declaration come a little early in Sydney this would have been a white wash.”

Andy C: “56-10 in 22.5 is ignominious even by England’s standards. Root should follow Kohli’s lead, then let Stokes have a go, then bring back Brearley…”

Shah Zaib: “So Patty Cummins ends the series as the leading wicket taker and to go with excellent captaincy.” — Here are the series stats… tough call for player of the series! Cummins, Boland, Starc, Green, Head all strong candidates.

Anas: “England once again came to Australia 4 – nothing”

Anay: “Nathan Lyon with one of the all-time performances.” — TFC!

Cummins to Robinson, OUT, cleaned up by a full-bunger! England lose nine wickets in the nighttime session, and 10 for 56 all told. Robinson backed away to leg and threw the bat. Cummins’ yorker was overpitched, but Robinson had stepped too far back to reach it, and watched it miss the toe and crash into the base of off stump